Ozark Jubilee was a massively popular country music variety show broadcast from the Jewell Theatre in Springfield, Missouri. It aired weekly on the ABC Television Network from 1955 to 1960. The Jubilee originated in December 1953 as a local television broadcast on KYTV and went through rapid transitions in 1954. From KYTV it was developed into a stage show and KWTO radio broadcast. Then it became an ABC nationwide radio show and eventually launched as a live national television broadcast in January 1955.

The show launched the careers of performers such as Porter Wagoner, Wanda Jackson, and Brenda Lee, and regularly featured established stars such as Webb Pierce, Faron Young, Patsy Cline, and Johnny Cash, along with many locally based artists, including Slim Wilson, Speedy Haworth, the Philharmonics, the Promenaders, Zed Tennis, Bill Ring, and Goo-Goo Routledge. During its run of nearly 300 weekly programs, produced and broadcast for nearly six years with no hiatus, the Jubilee gave millions of national television viewers their first exposure to country music. For a brief time, Springfield ranked third in the country as a center for network television production—behind only New York and Hollywood.

The hillbilly variety show form of professional entertainment — a mixture of singing country songs, playing music on instruments like the guitar, fiddle, and banjo, comedy routines, square dancing, and such matters — has been around since the days of vaudeville, and it continues to this day. In the early 20th century, the Weaver Brothers and Elviry developed, expanded, and fine-tuned a hillbilly variety act that became very successful on the vaudeville circuit, including the east coast of the U.S. and even Europe. From the 1920s and 1930s onward, live hillbilly variety shows on stage and as radio broadcasts became popular. The National Barn Dance in Chicago, the Grand Ole Opry in Nashville, Korn’s-A-Krackin’ in Springfield at the Shrine Mosque, the Big D Jamboree at the Sportatorium in Dallas, and the Louisiana Hayride in Shreveport are notable examples of hundreds of such shows that sprouted up from New York to California. The hillbilly variety show tradition continued through the Hee Haw television program in the late 1960s and early 1970s to the present-day live shows in Branson, Missouri, Pigeon Forge, Tennessee, and elsewhere.

Country music had been played, sung, and enjoyed for centuries at various places in the British Isles and the American upland South in a form that could be characterized as amateur and diffused. However, the adoption and dissemination of phonograph records and particularly radio in the early 1920s created the technological conditions that enabled country music to emerge as a professional form of entertainment.

The impact of radio on the Ozarks was tremendous. Receiving wireless radio broadcasts in homes in the hills and hollers of the Ozarks was a disruptive, transformative technology. Suddenly the world entered the living room. With its down-home mix of news, weather, country music, farm reports, and sports, KWTO AM 560 (“Keep Watching The Ozarks!”) became an extremely popular and influential radio station in the Ozarks. The emergence of national radio networks exposed Ozarkers to many other nationally broadcast shows, including the network portion of the weekly Grand Ole Opry show. KWTO had to compete with those other nationally broadcast hillbilly variety shows.

As radio entertainment developed in the 1940s, Springfield radio executives Ralph Foster and Si Siman decided to try producing a weekly hillbilly variety show that would be broadcast via KWTO one night a week. The show’s stable of performers could tour the region on other nights of the week, if local organizations would sponsor entertainment events in nearby towns, such as Marshfield, Mansfield, Monett, and Ava. They decided to call the program Korn’s-A-Krackin’, a riff on a recently popular Broadway show called Hell’s-A-Poppin’, which Foster and Siman had seen in Kansas City. The Weaver Brothers & Elviry, Bill Ring, Lennie Ayleshire and Goo-Goo Rutledge, and many others performed on Korn’s-A-Krackin’ during its six-year run in the 1940s. For a time, the show was broadcast nationally over the Mutual Broadcasting System. Interest in the show eventually declined, in part because it lacked a nationally known master of ceremonies and headliner.

Television followed close on the heels of radio. By the late 1920s, television transmissions had been successfully demonstrated, but the onset of the Great Depression, followed by the Second World War, resulted in a long latency period between the development of television as a technology and its broad adoption. By the late 1940s and early 1950s, during the boom years after the world war, radio networks had become stronger, radio programs were quite sophisticated, and advertising revenues were substantial. Even so, television was beginning to make cracks and dents in radio’s sphere of influence. Forward-thinking radio executives like Foster and Siman recognized that television presented tremendous opportunities. The challenge was to develop and deliver a winning formula of compelling television programs. The hillbilly variety show offered promise.

Foster and Siman soon had to confront the persistent, confounding problem that had challenged them for years: they needed an established country and western star to host and carry the show and then they needed that star to thrive and stay in Springfield. They decided to approach Red Foley, who already was a big, established country music star, to host the show. For years Red had hosted the Prince Albert Tobacco segment of the Grand Ole Opry, which was a very popular weekly national radio broadcast.  Foley agree to make the move to the Ozark Jublilee. The show was an amazing amalgam of local and national talent. It was one of the first nationally broad television programs of any type, if not the first, to solve a problem that vexed the new medium: while some shows appealed to primarily to men, women, or children, no show had proven it could appeal to all three groups. Early viewer studies of the Ozark Jubilee revealed that its audience was almost an equal mix of all three groups, and the average number of viewers per TV set was higher than many other shows.  After a six year run, the Jubilee broadcast its final show on September 24, 1960. 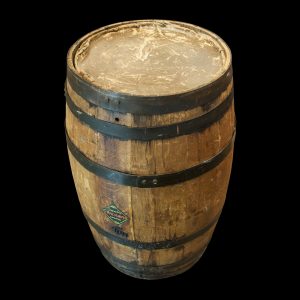 Perhaps best known for his hits “Peace in the Valley” and the “Chattanoogie Shoe Shine Boy,” Clyde Julian “Red” Foley had been a popular star on the Grand Ole Opry for eight years when he came to Springfield to host the Ozark Jubilee in 1955. Broadcast from the Jewell Theatre, the show reached a national audience … Red Foley Barrel Seat 1955 - 1960

The Bryan T. E. Bisney Collection includes digital scans of material collected by Bryan T. E. Bisney (1908-1995) during his career in broadcasting and television production. Bisney was the producer/director for Ozark Jubilee. While most of the items in this collection are associated with Ozark Jubilee, there are also objects from Bisney’s time with various radio and television stations.

This project is dedicated to the preservation and access of the show Ozark Jubilee. Missouri State University Libraries has digitized 60 episodes that reside in kinescope form in the University of California, Los Angeles Film and Television Archive.