Route 66 is collectively remembered as the “Mother Road”: a path to opportunity and a symbol of freedom. Officially named in 1926, this 2,400-mile highway started in Chicago and traveled southwest through eight states before ending in Los Angeles. Route 66 connected small towns to urban centers and facilitated the prolific growth of new towns and businesses along its path. Although other states are home to significant stretches of the historic route, Missouri is the only state that can claim the title “Birthplace of Route 66.” Missouri and America’s Mother Road share a history; the Show-Me State fostered the creation, maintenance, and memorialization of Route 66, while the road fueled the proliferation of countless small towns and businesses in the state.

Long before Route 66 was conceptualized, transportation changes in the early 20th century prompted local and national interest in creating a public road network. In 1911, over 16,000 cars were registered in Missouri. That number climbed to 150,000 in 1917, as a growing number of Missourians could afford to purchase automobiles.1 This new population of car-owners created a demand for a navigable, well-maintained public road system to replace existing unpaved and inadequate roads. Missouri voters approved a $60 million bond issue to improve road conditions in 1920.2 A year later, the federal government, which shared an interest in improving roads, introduced the Federal Aid Highway Act in 1921 with the intention to create a cohesive highway network that connected rural and urban communities.3 Together, these state and national efforts paved the way for the creation of Route 66.

Route 66 also grew out of the shared interests of Springfield Attorney John Woodruff and Oklahoma Highway Department Chairman Cyrus Avery. Although only Avery is remembered as the “Father of Route 66,” both men were extremely influential in planning and promoting the motorway; Avery was also prominent in naming Route 66. Woodruff and Avery advocated for Route 66’s diagonal Chicago to Los Angeles route believing it would divert traffic from Kansas City to Missouri’s rural towns.4 Their proposed route would pass through the state, crossing St. Louis before heading southwest through Cuba, Rolla, Lebanon, Springfield, Carthage, and Joplin. After years of unsuccessful lobbying, Route 66 was finally approved to travel their route by the Secretary of Agriculture on November 11, 1926.5 The following year, Avery pushed for the creation of the US Highway 66 Association to promote and pave the road. Woodruff became the organization’s first president and Avery its vice president.6 Although Route 66 would not be entirely paved until 1938, Avery and Woodruff’s efforts paid off in 1931 when the Missouri stretch was completed.7

The promotion and improvement of the highway in the late 1920s caught the attention of the trucking industry, in its infancy, quickly recognized Route 66’s promise as a shipping way. Unlike highways in the Northern United States, the diagonal, all-season route traversed flatlands through temperate climates.8 It also crossed rural and previously isolated regions, like Southwest Missouri, enabling farmers to ship their grains and produce by truck.9 These conditions made Route 66 an ideal choice for transporting freight from the Midwest, and by 1930 the trucking industry rivaled the railroad in terms of shipping.10 The need for roadside amenities along Route 66 resulted in the proliferation of small businesses along the road, particularly in Missouri.11 The increased demand for roadside services along Route 66 throughout the 1930s continued to feed the growth of Missouri’s small towns and businesses, despite devastating economic and environmental crises. Although trucking declined because of the economic downturn during the Great Depression, Route 66 saw increased traffic from laborers, farmers, and working families desperate to find economic opportunities in California and the West. Many of these travelers were also fleeing the Dust Bowl, a destructive environmental disaster that caused drought and soil erosion across the Great Plains, including parts of western Missouri. By the end of the 1930s, an estimated 400,000 people had traveled west on Route 66.12 This unprecedented movement westward led to a boom in many of Missouri’s towns and mom-and-pop businesses along Route 66.

Although civilian travel on the road declined during World War II, Route 66 continued to bolster Missouri’s roadside economies as it served as a major military transportation corridor. From 1939 to 1945, the highway provided an avenue for moving materials and personnel from centralized production locations and military bases in the Midwest and West to coastal staging points.13 As military families and people seeking employment in western defense plants traveled the highway, new businesses emerged and existing service stations, restaurants, and motor courts reaped the financial benefits of long-term and repeat visitors. Motor courts or “tourists courts” emerged in the 1930s and 40’s as a “classier alternative to dingy cabin camps. Unlike downtown hotels, courts were designed to be automobile friendly. You could park next to your individual room or under a carport.”14 One collection of roadside businesses just north of the newly constructed Fort Leonard Wood were so successful that they eventually grew into a town called St. Robert.15

After World War II, Route 66 experienced a “golden age” as Americans gained unprecedented wealth and enjoyed increased leisure time. These conditions led to a rise in the number of families who could afford to purchase a car and take vacations. The preceding decades of travel along Route 66 had created infrastructure in small towns to support travelers. As a result, the road quickly became the popular choice for the “Great American road trip.” The increase in travel sparked another, much larger, boom in Missouri’s businesses along the route. One popular motor court, the Coral Court in St. Louis, was founded in 1941 with twenty-one rooms. The number of rooms grew to 66 by 1946.16 The increased demand for roadside amenities also drove innovation in the restaurant industry and led to the creation of the first drive-up restaurant. Fittingly located in the birthplace of Route 66, Red’s Giant Hamburg in Springfield drew travelers off the highway for a bite to eat.17

Taking a road trip on Route 66 involved extra considerations for Black Americans looking to take part in America’s new favorite pastime. Although white Americans found countless travelers’ courts and roadside attractions along Route 66, Black tourists faced the challenges of navigating segregation and sundown towns as they traversed the road west. This was especially true in Southwest Missouri, where several sundown towns18 and unwelcoming businesses dotted the route.19 Sundown Towns are historically all-white communities, neighborhoods, or counties that exclude Black and other historically marginalized people “through the use of discriminatory laws, harassment, and threats or use of violence.”20 The name derives from the posted and verbal warnings issued to Black people that they may be allowed to work or travel in a community during the daytime, but were instructed to leave by sundown, or face the prospect of violence.21 African American travelers relied on tools such as The Negro Motorist Green-Book and a similar Southwest-Missouri pamphlet to help them locate the few Black-owned and welcoming businesses along Route 66 in the state.22 One Springfield business, Alberta’s, was listed in the Green Book almost every year from 1954 to 1967 and provided travelers a safe place to stay, eat, and shop. Similar businesses included Williams Hotel in Joplin and Austin House in Columbia, among others.23

Ironically, the success and popularity of Route 66 occurred at the same time as its demise. Dwight Eisenhower had observed the importance of an efficient road system to national defense as a general in World War II. Taking inspiration from Germany’s system of high-speed autobahns, President Eisenhower pushed for a highway system that connected major cities via direct routes. Congress approved the Federal Highway Aid Act in 1956, jump-starting the modern Interstate Highway System. That same year, on August 2, Missouri became the first state to award a contract under the new highway law, and the first interstate construction began in St. Charles, Missouri, on I-70 at Missouri Route 94.24 Nearly 20 years later, Route 66 was almost completely bypassed in Missouri by I-44, and by 1985 the road was officially decommissioned in the state.25 The decline in travel and decommissioning of Route 66 increasingly led to the demise of many roadside towns and businesses. Red’s Giant Hamburg closed in 1984 and the Coral Court ended operations in 1993.26

In the wake of the highway’s decommissioning, the Missouri Route 66 Association was formed in 1990, with an intention to “preserve, promote, and develop old Route 66.”27 At the time, Missourians recognized the importance of preserving the ideas and themes that Americans associated with the route. In popular culture, Route 66 was memorialized in an American Adventure crime drama television series that ran from 1960-1964, called Route 66; it starred Martin Milner and George Maharis. Route 66 had become more than a major route West. The highway was a symbol of freedom to Americans; the freedom to travel, explore, try new things, and seek a better life. As Bobby Troup’s song about the famous highway suggests, “Get your kicks on Route 66. It winds from Chicago to L.A. 2,000 miles all the way.”28 Today, Route 66 lives on as the old “Mother Road” from Missouri to the great west, providing travelers a glimpse back in time to a lost era. 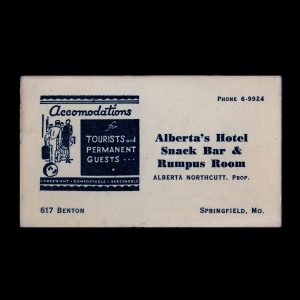 This business card advertises the hotel owned by Alberta Northcutt Ellis, an African American entrepreneur from the Ozarks. Ellis owned several businesses in Springfield including the Crystal Lounge and The Farm–a working farm located ten miles west of the city that also served as a roadside park for Black tourists. After World War II, Ellis … Alberta’s Hotel Business Card 1950s - 1964