When employees of the St. Louis Transit Company voted to strike on May 8, 1900, the effect was to severely crush the city’s primary public transportation system for several months.1 Similarly, in December 1918, 2,800 employees of the Kansas City Railways, in demand for higher wages, walked off the job and temporarily shut down the city’s transportation system.2 In 1916-1917, workers struck the Springfield Traction Company, shutting down the trolleys for 252 days.3 The striking workers were almost exclusively white, U.S. born, and active in their communities. Many worked the same route their entire careers and were on amicable terms with patrons who frequently supported their protest. Residents often saw conductors as social policemen and protectors of the communities bordering their routes.4 As lower-paid immigrants began to move into the workforce and corporations began to take over routes previously managed locally, dissatisfaction grew among predominantly white and U.S. born workers and many of their patrons. Immigrants, many of whom were German born, increasingly were hired into the public transportation workforce but often were paid less than “native” born whites for the same jobs. People who crossed the picket line to work on the streetcars could be anyone — “native” born whites, immigrants, and anyone willing to work for lower wages. Strikes such as the one that took place in Springfield in 1916, threatened to disrupt economic prosperity in cities that had become dependent on public transportation for growth and commerce.

Strikes of public transport workers were not uncommon and impacted the entire community’s economy when they occurred. In urban areas in Missouri such as Kansas City, St. Louis, Springfield, Joplin, and St. Joseph, residents depended on an extensive network of trolley and streetcar lines to navigate cities that were too large to walk. In the cities and towns of late nineteenth century Middle America, the rough and muddy condition of the city streets, either unpaved or paved with cobblestones, made walking problematic. Initial transport systems were horse-drawn omnibuses. Although often bumpy, riding horse drawn cars spared the passengers exposure to the muck of city streets with the additional benefit of navigating up steep hills, such as the bluffs at the river’s edge in Kansas City. However, the horses’ speed and stamina limited the effectiveness of horse-drawn omnibuses and railed horsecars to an approximate four-mile radius from a city’s center.5 Additionally, horses created an average of 10½ pounds of manure per day, creating a clean-up and disposal challenge for the neighborhoods.6

A transportation solution was needed that would grow with the quickly expanding metropolises. Although trains connecting major commercial cities finally reached major Missouri cities in the 1850s and 1860s, they were noisy and dirty and altogether unsuitable for use in crowded cities. An intra-city solution was needed that would provide a more city-amenable and less expensive method of transportation in these confined spaces. Entrepreneurs in St Louis saw an opportunity to upgrade to horse-drawn rail cars (known as horsecars), following the example of profitable Eastern companies. Looking for cheaper solutions in 1868, they experimented with steam-powered vehicles and later electric rail cars to meet St. Louis’ growing demand for public transportation. At one point, investors even built a cable-car system. Still, the fast growth of the city and the problems of operating a cable system drove investors to transition to the new and more economical electric trolleys and streetcars.7 In 1874, the completion of the Eads Bridge across the Mississippi River finally connected East St. Louis, Illinois, with St. Louis, Missouri; shortly after that, new trolley lines opened between the two cities. For the first forty years, several dozen privately owned lines operated in the area. As operating parallel systems became less profitable, most of these companies consolidated into the St. Louis Public Service Company. The company operated under a franchise agreement with the cities it served until taken over by the Bi-State Authority (later Metro) in 1963. Despite the rail companies’ financial struggles, businesses grew up along the intra-city rails, and new residential communities flourished.

Intra-city electric trolleys and streetcars addressed the negative attributes of locomotives producing much less pollution and were considerably quieter. The cars, powered by overhead electrical wires, were smaller and lighter than train cars and, therefore, less expensive to manufacture and maintain. The rails on which trolleys ran were embedded in the street and even with the surface, which enabled smooth transit for pedestrians and other vehicles as well as drainage for rainwater.8 Installation of rails for horse-drawn and electric cars also was faster, less expensive, and easier to maintain than those needed for steam locomotives, facilitating the quick expansion of the electric trolley system as cities expanded.

Similar to advancements in St. Louis, the Citizens Railway Company in St. Joseph, Missouri, replaced its horse-drawn omnibuses with horse cars shortly after the Civil War in 1866. By 1880, six different companies were operating horsecars in the city. In 1880, Peoples Street Railway advertised the first electric streetcar, although historical records indicated that it may not have gone into operation until 1887.9 In 1885, another company, St. Joseph Railway Light and Power Company, operated 150 electric streetcars over 40 miles of track. This was significantly more miles than either St. Louis or New York City had in operation at the time. Between 1910 and 1939, the company also operated a three-mile interurban electric railway between St. Joseph and Savannah, Missouri.

Missouri’s most extensive trolley system was a tri-state network connecting southwestern Missouri, eastern Oklahoma, and southeast Kansas mining towns. The hub of the trolley system was in Joplin, Missouri. Lines extended as far north as Croweburg, Kansas, south to Miami, Oklahoma, and east to Carthage, Missouri. By 1920 this network provided easy access to nearly every town in the region, bolstering the mining industry by providing affordable transportation for mineworkers from their homes to the mines and back.10

But the honor of being the largest trolley system in Missouri – and the third largest in the country at its peak — belongs to Kansas City, Missouri, which also began with horse-drawn railway cars in 1870.11 In 1885, the city added a cable car system similar to the one operated in San Francisco. The cable design allowed cars to navigate up and down the steep bluffs from Union Depot in the West Bottom at the juncture of the Missouri and Kansas rivers to Woodland Avenue on the city’s east end. When electric power replaced horse-drawn cars, Kansas City’s rail system expanded even faster, providing transportation to Liberty, Lawrence, Olathe, Fort Leavenworth, Excelsior Springs, and other local communities. By 1920, the network covered hundreds of miles of streets, providing pollution-free, inexpensive transportation to all classes of area residents.12 Ridership in 1922 reached an all-time high of 136.8 million riders, dropped to 70 million just before Pearl Harbor, but later soared back to 136 million immediately after World War II.

Kansas City also was relatively progressive in that it did not attempt to segregate the trolleys or streetcars. In fact, citizens voted down a proposed ordinance to institute Jim Crow segregation on streetcars and trolleys.13 This was not the case in St. Louis, where Black people were initially required to ride hanging onto the outside of the cars. In 1868, in response to a lawsuit filed by Neptune and Carolina Williams, the St. Louis Circuit Court ruled that companies must allow Black passengers to ride inside the cars.14 When, despite the court order, the practice continued, Charlton Tandy organized a boycott in 1870 to force the companies to allow Black passengers to ride safely inside the cars.15

Missouri communities such as Springfield did not have as many official Jim Crow laws on the books compared to those in southern states; however, many of the public facilities including streetcars were segregated by white supremacist custom. The previously mentioned Springfield labor strike regarding streetcars intensified racial relations in the city. During the strike, citizens who supported the workers road jitneys, but Black residents were frequently not allowed to ride the jitneys by local segregation custom.16 Peter Small, a Black Springfield resident, reported being physically threatened after riding a jitney. He complained, “They won’t let Negroes ride on the jitneys even if I want to ride.”17 While there is evidence of racial segregation on streetcars in some Missouri cities, the construction of the cars and the method of loading from the front and unloading from the rear of the cars made strict adherence to segregation impractical.

Although the customs regarding segregation on public transportation was less hardline in Missouri, the expansion of streetcar lines still facilitated segregation because they allowed white families to move at greater distances from the city centers and impoverished neighborhoods. Real estate investors and proponents of segregated housing patterns, such as Kansas City’s J.C. Nichols, built their new suburbs close to or near the end of the trolley or streetcar lines. Availability of transportation from the new housing developments to the downtown business districts contributed to the fast expansion of Missouri’s urban areas. For example, Nichols saw the electric streetcars as so critical to the success of his master plan for the development of the Country Club District south of downtown Kansas City that when the Dodson Dummy Line threatened the success of his venture, he purchased the railway. He then turned the company over to the Metropolitan Street Railway Company to operate in exchange for its commitment to electrify the railway.18 The streetcar ran along a right-of-way now known as the Harry Wiggins Trolley Track Trail. In 1957, the Country Club Line to Brookside was the last electrified streetcar line in Kansas City to be decommissioned when ridership dropped below 46 million annually.19

With post-World War II Detroit churning out automobiles and the Eisenhower administration funding a new interstate highway system, trolley ridership declined sharply at same time the population of Missouri’s metropolitan areas grew. For example, in Kansas City ridership dropped from 130 million in 1947 to 121 million in 1948, 106 million in 1949, and 92 million in 1950.20 In this same period, the population within the city limits of Kansas City grew from 399K in 1940 to 456K in 1950. Most cities expanded and changed faster than the fixed-route street railways could adapt. As passengers deserted public transportation for their automobiles, investors in public transportation abandoned streetcars for buses, looking for ways to reduce costs and reach riders in suburbs where streetcar tracks did not exist. Not only were buses less expensive to purchase and maintain, but companies also avoided the expense of maintaining the streets and bridges that previously they shared with the city. On June 23, 1957, Kansas City converted the last trolley line to bus service. The public streetcar lines in St. Louis ceased operation in May 1966.

Kansas City, Missouri, too, responded to the desire for light rail by installing two miles of track from the River Market to Kansas City’s Union Station. Over 9.4 million riders have enjoyed the service since it launched in 2016. A 3.5-mile expansion from Union Station to the Country Club Plaza and the University of Missouri-Kansas City is scheduled to open in 2023. A third three-fourth mile route, planned for operation in 2025, will connect River Market to Berkley Park on the Missouri riverfront. Ridership along the entire route is free to the public. Financial analysts credit the streetcar with contributing one-quarter of the $1.8 billion in new investment along the streetcar route between 2013 and 2018. Proponents of the expansion of the light rail system believe the city will enjoy similar financial growth as other lines open to the public.21 Debates remain about for whom the streetcar is meant to serve, however, as it runs from the heavily financed River Market to the wealthy neighborhood of Brookside. With revitalization of city services such as the streetcar, we must always ask the question, “for whom are these services meant to serve?” 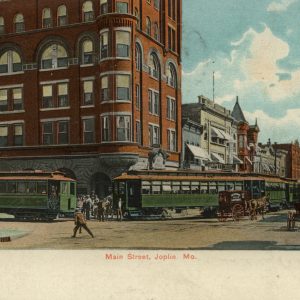 This 1906 tinted postcard shows a bustling intersection in downtown Joplin. The picture displays four electric trolleys following each other on Main Street past the Keystone Hotel. As part of the Southwest Missouri Railway, Joplin’s electric interurban trolley system connected the city’s neighborhoods and linked Joplin with other mining towns in Southwest Missouri, Northeast Oklahoma, … Trolley at Keystone Hotel 1906