This t-shirt, game program, and ticket stub are from past editions of the Border Showdown, the sports rivalry between the University of Missouri and the University of Kansas. The conflict is usually referred to as the Border War by fans, and the t-shirt was created following the 2007 football game between the schools. It features the final score of one of the biggest games in the rivalry’s history, when the third ranked Tigers beat the second ranked Jayhawks 36-28 in a game now known as Armageddon at Arrowhead. The program is also from that game and the ticket is from the following year’s showdown, when KU avenged their loss beating MU 40-37. The football rivalry first kicked off in 1891, with equally intense basketball games starting sixteen years later in 1907. The bad blood was spurred on by both schools residing in the same conference for decades, but when Missouri left the Big 12 for the SEC in 2012, the contest went dormant. However, the schools have agreed to rekindle the Border War, with annual basketball games beginning in 2021 and football games in 2025. Many consider the ferocity of the rivalry to be an extension of the Border War that took place in the Kansas/Missouri border region in the 1850s and 1860s. The persistent animosity symbolizes how fans have connected the sports rivalry with the historic conflict between the states. 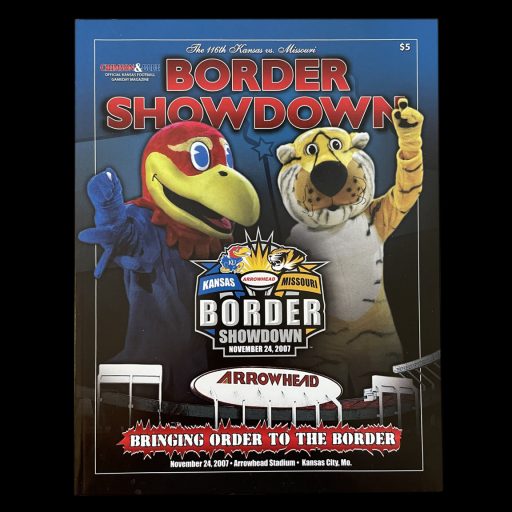 Remembering the Border War in History and Sport

University of Missouri head basketball coach Norm Stewart famously despised the University of Kansas so much that he refused to spend a penny in the Sunflower State. The legendary coach was well known for his hatred of the Jayhawks, even going so far as spending the night in Kansas City and gassing up the bus …