Former President Harry Truman and a Missouri mule at the state fair on August 23, 1955. As a young man, Truman worked on his family’s farm for eleven years where he plowed many fields with mules. The sturdy animals were first brought to Missouri by traders along the Santa Fe Trail in the 1820s. Mules soon became a staple of Missouri farms.   Despite rapid advancements in military technology, the surefooted mule was indispensable for hauling equipment on the Western Front in World War I. The demand for mules on the farm and overseas grew rapidly. Guyton & Harrington in Lathrop became the largest mule dealership in the world. Although replaced by tractors for farm work in the 1930s, the mule remains an important symbol of Missouri’s history and culture 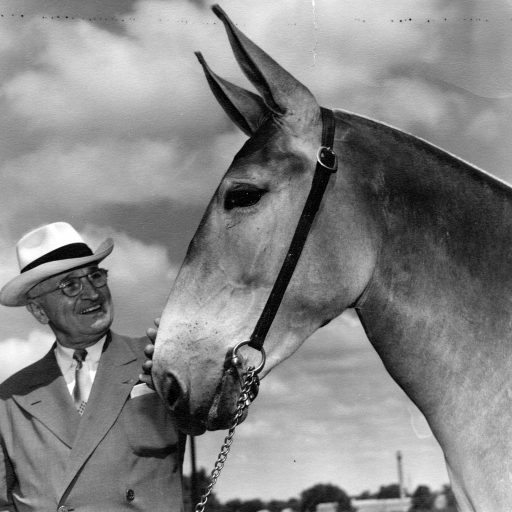 In 1995, the mule was recognized as the official animal of Missouri. The honor was much deserved for an animal that helped many Missourians on their farms and many soldiers on the battlefield. The Missouri mule was a prized draft animal known for its strength and agility. In the late nineteenth century, Missouri livestock breeders …