Gottfried Duden was one of the first German visitors to the newly established state of Missouri. After a four-year residency in Montgomery County during the 1820s, he published a glowing Bericht or Report about the region to persuade settlers to make the state their new home. He titled the document, Bericht über eine Reise nach den westlichen Staaten Nordamerika’s and einen mehrjährigen Aufenthalt am Missouri in den Jahren 1824, 25, 26, und 1827, in Bezug auf Auswanderung und Übervölkerung (Report on a Journey to the Western States of North America and a Stay of Several Years on the Missouri during the Years 1824, ‘25, ‘26, and 1827).

Duden thought Missouri was perfectly suited for German emigrants and an ideal, almost utopian, location for farming or commercial activity. The state’s healthy and mild climate, fertile soil, arteries of transportation, and abundance of fish and wildlife contrasted with the growing poverty and hunger in many German regions. And its free and civilized society and government stood in stark contrast to Germany’s closed and privileged society. Duden’s report was not the primary factor for Germans to come to Missouri and many settlers discovered discrepancies in climate and soil quality, but reports like this one stirred enthusiasm and contributed to romantic depictions of America. 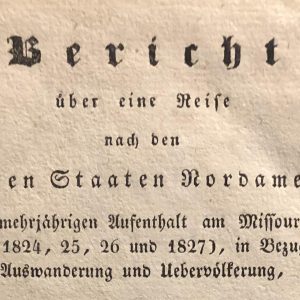 During the first half of the nineteenth century, German settlers came as groups, families, or individuals to Missouri. At the time Germany was not yet a united country but a conglomeration of duchies and principalities. As a result, these German immigrants differed in regional origin, social background, and religious persuasion and lacked a shared sense … Early German Immigration: 1820-1860