This photo from the St. Louis Post Dispatch of October 1918 shows American Red Cross stretcher bearers taking a patient from a house at Edzel and Page Avenues during the Spanish influenza pandemic. All but one person is masked as they transport the patient to the hospital. This scene would have been commonplace across Missouri during the pandemic.

Although well-known as the “Spanish” influenza, many historians believe the first epicenter of the flu occurred in March 1918 at Camp Funston, Kansas, which was only 130 miles away from Missouri’s border. The illness spread quickly into Missouri and grew into a pandemic that lasted into 1919. Like other states, Missouri responded to the pandemic by calling upon the American Red Cross to help with the public health emergency. Little was known about the spread of influenza, and many Red Cross nurses in the state fell ill as they cared for 30-40 patients a day.

The pandemic has been largely forgotten in terms of historical interest until recently, although it killed more people than the Great War of 1914-1918. The war overshadowed it; however, the experience of mobilizing for warfare guided Missouri cities and rural communities in their desperate fight against a previously unknown enemy. 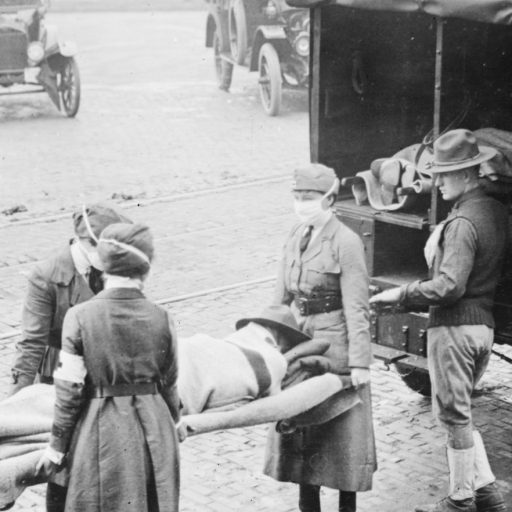 The Influenza Pandemic of 1918 and Missouri’s Response

The Spanish Influenza pandemic of 1918-1919 occurred just as World War I was winding down. The name, Spanish Influenza, likely derives from the King of Spain’s diagnosis, followed by a sensationalized report of his illness. Unlike many wartime countries, Spain was neutral in the Great War and had no press censorship. The pandemic unfolded in …