Today, Washington University is among the world’s leading research universities. It has an operating budget of more than $3.5 billion, with more than 16,000 students and approximately 4,000 faculty among its seven schools.

At its founding, Washington University served students from St. Louis. Today, the university draws students and faculty to St. Louis from all 50 states: including the District of Columbia, Guam, Puerto Rico, and the Virgin Islands. This illustrates its visibility and impact internationally. Nearly 90 percent of first-year undergraduates are out of state students. There are more than 152,000 alumni that make a global impact in all sectors of society.

Once considered a “streetcar” college, the university evolved into a national university. Washington University maintains its commitment to St. Louis. For example, the university’s current chancellor, Andrew D. Martin, announced a bold new financial aid program his October 2019 inaugural address. This program will provide free undergraduate education and accept undergraduates with financial need from Missouri and southern Illinois. Chancellor Martin’s initiative, the WashU Pledge, reflects his commitment to advancing efforts to broaden educational access; this initiative will attempt to improve diversity, equity, and inclusion. WashU Pledge will strengthen the university’s partnerships in St. Louis and across the region. “By doing so, we’re attracting our very best and brightest and keeping them right here, close to home,” Chancellor Martin noted.

Recruiting talented students, faculty, and staff to Washington University and to St. Louis is a vital contribution to the region along with the scholarly, creative, and impactful work produced by students and faculty alike every day. Innovative, pathbreaking teaching and research take place every day at Washington University across a variety of disciplines. The university has a comprehensive undergraduate, graduate, and professional programs in a myriad of fields. These programs include architecture, arts and sciences, business, engineering, law, medicine and allied health, public health, and social work. The university is working to build a better world by educating and preparing more effective leaders with the knowledge, experience, and creativity to tackle complex problems and meet the world’s challenges.

The campus was originally located in downtown St. Louis. In 1905, due to the foresight of one of the university’s most impactful leaders, Robert S. Brookings, it moved to its current location at the western edge of Forest Park in 1905. Originally known as the Hilltop Campus, it is now called the Danforth Campus in recognition of the contributions of the late chancellor emeritus, William H. Danforth and his family.

The Medical Campus on the eastern edge of Forest Park has grown dramatically as well. Washington University School of Medicine in St. Louis is committed to advancing global human health. The School of Medicine has been consistently ranked a top medical school for research. It is also a catalyst in St. Louis’s biotech and startup scene. The School of Medicine’s faculty has contributed many discoveries and innovations to science and medicine since the school’s founding in 1891. The school includes recognized innovators in science, medical education, health care policy, and global health. They treat patients and train new leaders in medicine at Barnes-Jewish and St. Louis Children’s hospitals; both ranked among the nation’s best hospitals and noted for excellence in care. The Siteman Cancer Center at the School of Medicine and Barnes-Jewish Hospital has been recognized as a top U.S. cancer institution.

Like William Greenleaf Eliot and Robert S. Brookings, William H. Danforth had a profound impact on the university. Danforth served as chancellor for 24 out of 65 years of service to Washington University. During his chancellorship from 1971 to 1995, Washington University grew in national and international recognition for its teaching and research, completing its transition from a local college to a national research university.

Under his successor, Chancellor Emeritus Mark S. Wrighton, the university made significant progress in student quality, campus improvements, resource development, curriculum, and international reputation. Accomplishments during his 24 years as chancellor include: a more than three-fold increase in undergraduate applications; more than 300 new endowed professorships for faculty; new programs in biomedical engineering, public health, and American culture studies; and completion of more than 50 new buildings and the redevelopment of the east end of the Danforth Campus.

In early 2021, Chancellor Martin, the university’s 15th chancellor, launched an 18-month strategic planning process to develop a roadmap that will guide the university’s direction over the next decade. The university seeks to be bold, transformative, and collaborative as it considers its next steps, building upon the university’s already strong foundation.

As the university charts its course for the future, at the forefront are Chancellor Martin’s three foundational pillars; these include increasing the university’s academic distinction, educational access, and role and impact in St. Louis.

As he vowed in his inaugural address, “we must use our firm foundation as a foothold for future momentum as we continue our mission to be a place of distinction in education, research and patient care. … I believe we can continue to honor our past and build bridges to our thriving future.” These goals both honor the mission of the university’s founders and embrace the challenges of the 21st century. 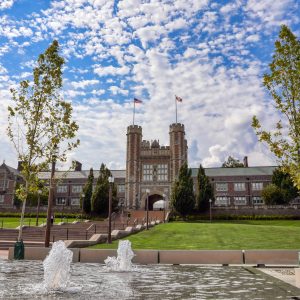 Brookings Hall was one of the first buildings on the Danforth Campus. The cornerstone for Brookings (then University) Hall was laid on November 3, 1900, and construction was completed in 1902. The architects were the Philadelphia firm Cope & Stewardson, represented by James P. Jamieson. The general contractor was Bright Construction Company. These companies worked … Washington University in St. Louis 1853 - Present