No object better reflected early Missouri’s history than the iconic western paddlewheel steamboat. Missouri boasts of access to two of the nation’s major interior rivers — the Missouri and the Mississippi, and, therefore, the steamboat figures prominently in the early history of the state. Oftentimes, Americans romanticize the steamboat age as a time of slow and peaceful life, such as in Mark Twain description of Huck and Jim’s raft ride down the Mississippi River or the lyrics from the song “Ol’ Man River” from the musical Show Boat. These fictional portrayals are an illusion rather than the reality of life in the steamboat age, however. This essay deconstructs the myth of the steamboat and replaces it with an historic account of what the US government and American ingenuity did to promote safe and efficient steamboat transport and travel. These actions resulted in increasing consumer confidence, encouraged a flood of settlers to relocate to Missouri in the decades after statehood, and promoted an increase in trade. Had the western steamboat been absent during western expansion, Missouri as we know today likely would look much different.

“Western steamboats from the beginning were common carriers in the service of the general shipping and traveling public,” wrote historian Louis Hunter.1 The waterways were busy highways and steamboats were the freight trucks, operating as the US Post Office, UPS, and Federal Express does today. Over the years, government and private companies have worked together to improve infrastructure and modes of transportation in an effort to facilitate people’s mobility and increase commerce. Hence, similar to our consumer needs for modern-day freight lines, innovations in steamboats occurred because it was critical to successfully ship tons of merchandise and tens and thousands people to the West in the fastest and less expensive way possible.

The first steamboats navigated the Mississippi Valley region around 1811 and the stakeholders were fur traders and the US military. The interests of these two parties were intertwined, and both took advantage of the steamboats’ ability to move both up and down rivers for moving troops, provisions, and merchandise for forts and trade purposes. The American Fur Company used steamboats to transport western furs to market.2 The U.S. military’s Indian agents, one of whom was Robert Campbell a fur trader and commission merchant from St. Louis, also contracted steamboat firms for transporting goods to fulfill treaty agreements with Indigenous groups for land use or purchase.3 By the 1850s, the population of Missouri had grown as settlers had moved to the state in the preceding decades to take advantage of low cost land and economic opportunities. The demand for steamboat shipping was at its peak in the years before the Civil War. Missouri residents relied on steamboats for transportation and to ship agricultural products to market as well as to gain access to consumer goods from the East and Europe. As with all expansion, government land was offered from east to west. Business increased yet again as the land west of Missouri was opened open for settlement by the Kansas and Nebraska Act in 1854. The U.S. government promoted urban growth in the West by establishing a new shipping route from eastern manufactures to Pittsburgh and then down the Ohio River and up the Mississippi to St. Louis wholesalers. These middlemen sent merchandise to the commission merchants in Missouri and Mississippi river towns, where it was forwarded further inland to the rural country merchants.4

Steamboat firms were ready to risk the loss of their boat for the high profits gained from shipping freight and passenger travel on the Mississippi and Missouri River, but first some stumbling blocks had to be remedied or at least lessened. The steamboat industry worked to overcome structure modifications and natural hazards on the river, sometimes pressing the government to aid them in promoting safer riverboat travel. Steamboats had some design flaws and could be death traps and the rivers themselves included hazards that could sink a boat. In 1840s, books and newspapers generated public attention to the dangers of steamboat travel and this led to regulations to protect live passengers and the establishment of the Steamboat Inspection Service.5 Boats typically were brought down by two of the greatest threats to steamboat travel: snags and explosions.

There were few details about the loss of the Steamboat Bedford. The boat “struck a snag and sank in five minutes,” possibly on a dead tree at the bottom of the river. “It is unknown how many drowned while traveling south on the Missouri River on April 27, 1840. However, the only one worthy of being named was Mr. Moore who was a revolutionary soldier. It was noted that “All passengers lost their baggage.” The Steamboat Arabia also hit a snag on the Missouri River near Parkville, Missouri, on September 5, 1856. It was heavy with 200 tons of cargo destined for communities in the newly opened Kansas and Nebraska territories. The passengers had time to safely disembark but the cargo and a mule sunk to the bottom of the Missouri River.6

Snags a leading cause for a steamboat loss. This led to the innovation of snag boats7 that removed debris from the riverbed, but this was an ongoing and frustrating task and there was frequently political conflict over the federal government’s role in paying for “internal improvements.”8 Unlike the ocean ships with a deep hull for a cargo deck below, western steamboat’s key innovation was a flat hull, often called a flat bottom, which eliminated a deep hull for freight and allowed safer travel. By the end of the decade and into the 1850s, steamboats were improved to ply in shallow rivers, many boasted in water only two feet deep. The inland rivers rose and dropped based on rain and mountain snow melts, which made safe traveling geographically unpredictable. It was generally thought that the season of navigation for the Missouri River commenced with the May rise and possibly through September when the rivers were often less than two feet deep. With such a small window of time, each summer many boats heavy with St. Louis freight travelled to the western border of Missouri, Kansas and Nebraska Territory, and Iowa along the Missouri River. The Mississippi also had the same dilemma, but its travel season was far longer so that made St. Louis a perfect place for a wholesaler market.

As seen by the next steamboat accident, explosions were the greatest threat for steamboats. Most incidents were caused by problems with the engine works. The engine had a boiler that was fueled by either wood or coal. To prevent an explosion the boiler had a second cavity wrapped around it that kept the boiler cool by pumping a continuous flow of water from the river. The devise was called a doctor and when these were clogged by the muddy water, an explosion could occur. This problem gave rise to a new government agency called the Steamboat Inspection Service that opened an office in St. Louis in 1853. They enrolled steamboats and inspected the hull, engine, and pilots according to the new regulations to protect human passengers.

From 1826 to 1848, the western rivers had 171 explosions and 1,381 deaths compared to the Ohio Valley that had only 42 explosions and 491 deaths.9 Many chemists sought to produce stronger metal that could withstand pressure and this saved many lives.  Another type of accident with the boiler was caused by human error as seen by this story of the explosion on the steamer Belle, in which two hundred passengers survived. The incident occurred while traveling to St. Louis, when the boat stopped to pick up fuel for the boiler at a woodyard a mile above Liberty, Illinois. A fire started, which may have been due to the captain’s decision to increase the pressure on the boiler to blow out excessive cinders from the stacks. This ignited the gun powder stored on the boat, completely blowing up the vessel and all its valuable cargo. “It is doubtful whether an individual would have escaped, had not the boat lay close by the shore, thereby enabling the passengers to leave previous to the explosion.”10 The chances of an explosion were highest when coming to dock. From these incidents and witness testimony, regulations banded transporting gun powder, but very likely this rule was ignored.

In another gruesome explosion, possibly due to a similar action as described above, twelve deck passengers and four crew member were killed. This explosion occurred on the steamboat Dubuque’s trip from St. Louis to Galena on August 15, 1837. The starboard side flue (stack) collapsed on twenty-three passengers as a resulted of the explosion . It was described that “the force of the explosion literally cleared it of freight, and everything which stood in its way. The deck passengers and several of the hands were dreadfully scalded. Many of them, in their agony, fled to the shore, stripped, themselves of their clothes, taking off with them much of their skin. It was several hours before any of them died.” The report made sure to state that the wealthier cabin passengers “escaped with little or no injury,” while passengers from the lowest social class died.11

In spite of the dangers, steamboat travel and transport continued into the late 19th century when it was overtaken by railroads and was made obsolete by the invention of cars and airplanes. Today, paddlewheel steamboats are relicts of the past and only ply the waters of the Missouri and Mississippi Rivers to transport tourists or entertain casino gamblers. Even so, the rivers still serve as important avenues for commerce. The U.S. Army Corps of Engineers have heavily invested in flood control and river dredging operations to protect the people who live along the rivers’ shores and to keep the rivers open for commercial barges that still transport products to market. 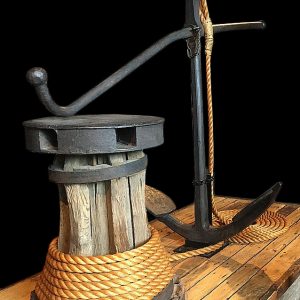 This five-hundred-pound anchor is from The Steamship Arabia. The size of the anchor surprises many. The Arabia’s size, including the weight of its cargo and passengers, and the strong currents of the “Mighty Missouri River ” mandated the anchor’s bulk. The anchor is shown resting on a piece of the original wooden deck. Next to … Steamboat Arabia’s Anchor 1856