In November 1933, when Luther Ely Smith returned to St. Louis from visiting the George Rogers Clark Memorial, which he helped build in Vincennes, Indiana, he appraised his adopted city’s riverfront.1 From near this site, William Clark and the Corps of Discovery co-leader Merriweather Lewis embarked in 1804 on their overland expedition to the Pacific Ocean. Almost a hundred and twenty-five- years later, Smith observed a Mississippi riverfront area in decay. It in no way represented the glory days of St. Louis when the heart of the city was the river. Smith’s experience with the Clark Memorial Commission emboldened him to consider a similar commission for St. Louis that would build a monument to celebrate both its rich history and future potential. He made it his mission to see such a monument and open-air park erected in place of derelict riverfront buildings. In Smith’s imagination, the memorial would attract visitors to the city center, serving as the pivot point for downtown St. Louis’s revitalization. For the remainder of his life, Smith devoted a good deal of his time and fortune to realizing his vision.

In underwriting the competition to design the memorial, Smith challenged contestants to develop something “transcending in spiritual and aesthetic values,” which would symbolize American history and culture.2 The Gateway Arch is the fulfillment of Smith’s dream. Although he never lived to see the actual monument built, Smith approved of Finnish-American Eero Saarinen’s winning design in 1947.3 Smith wrote to Saarinen and stated, “it was your design, your marvelous conception, your brilliant forecast into the future, that has made the realization of the dream possible – a dream that you and the wonderful genius at your command and the able assistance of your associates are going to achieve far beyond the remotest possibility that we had dared visualize in the beginning.”4

Architectural engineer Hannskarl Bandel’s unique construction design brought Saarinen’s design to life. Bandel’s developed a series of steel triangles that narrowed in size as they near the top. Each section was twelve feet in length and doubled-walled. Once installed, each unit was filled with concrete and covered with stainless steel sheets.5 The Arch is composed of 142 sections of these prefabricated stainless steel-covered triangles. The Arch weighs over 17,246 tons and is over 630 feet high and 630 feet wide at the base.

From its inception in 1933 until its completion in 1967, the Arch project was controversial. The 40 city blocks along the Mississippi riverfront envisioned as the location of the future memorial was densely populated and held hundreds of historic buildings. Smith’s commission planned to raze the buildings using the city’s power of eminent domain to acquire the property rather than purchase it directly from the owners.6 The resistance to the project and the lawsuits ensuing from the commission’s plans and approach to the land acquisition delayed the start of construction and approval of matching federal funds needed for site preparation. Legal suits to prevent the issuance of city bonds to fund the project paralleled the landowner suits against government acquisition and impeded progress. Then, the 1933 financial crash compounded the delay. Still, by 1942 with all property owner suits and appeals resolved, and questions over the issuance of bonds by the city settled, crews finished clearing the 90-acre site.7 Although America’s entry into World War II, combined with new lawsuits over the relocation of utilities and the elevated railroad track lines, again postponed construction of the Arch, work on the restoration of the Old Court House and the Memorial Park proceeded. Construction of the Arch finally began in 1961 with the laying of the foundation.

The final cost of the Arch was $13 million, financed with 75 percent federal funds and 25 percent city of St. Louis funds. Additionally, the Bi-State Development Agency funded the $2 million Arch transportation system.8 The total cost of the entire project including acquisition and demolition of buildings on the site, site preparation, restoration of the Old Court House, construction and landscaping of the surrounding park, the parking facility, underground museum and exhibits, visitor accommodations, building of the new train tunnel and moving of the railroad track, exceeded $40 million; again this was funded approximately 75 percent by the federal government and 25 percent by the city of St. Louis.9

In addition to political and financial delays, protests and labor disputes plagued the Arch’s construction. Civil rights activists saw the Arch project as a symbol of a perpetuation of racial discrimination in the building trades in a highly unionized city. Although African Americans worked as day laborers, none held positions in the skilled building trades hired to construct the monument. Black workers took action and protested the construction company in mid-1964. Then, on July 14, 1964, Percy Green and Richard Daly, two members of the Congress of Racial Equality, climbed the north leg of the Arch and remained there for four hours to protest the exclusion of Black contractors and laborers from the project. A group of protestors gathered in support and stayed while the demonstration lasted. Racism was also at the root of a demonstration on January 7, 1966, when members of the AFL–CIO walked off the job, refusing to work with plumbers affiliated with the Congress of Industrial Unions (CIU). The protesters claimed that the Black plumbers the CIU represented did substandard work. Given that the federal government funded a significant portion of the construction of the Memorial Park, the protests initiated a series of events that led to intervention of the U.S. Justice Department. The Justice Department filed a suit against the St. Louis AFL-CIO and four of its member unions. The cases were the first filed under the 1964 Civil Rights Act, which governed equal employment.

The Arch’s visitor center and museum opened in 1967. In that same year, the tram to the top of the Arch, opened to the public. The National Park Service assumed responsibility for management of the entire complex, which became known as Gateway National Park.10 The Park Service designed the museum, located under the Arch, to provide historical information about Thomas Jefferson, the American colonizers who played a role in expanding the West, and the First Nations peoples who populated the land that white Americans confiscated. The goal was to help visitors understand the complex intersection of diverse wants, needs, dreams, methods of attainment, and rationalization of consequences that drove western expansion. The Old Courthouse of St. Louis, notable because of its association with the Dred Scott case, is also located in the park and open to the public.11

While most visitors to the Park are attracted by the beauty of the edifice and the history it memorializes, the Arch has also attracted daredevils since its completion. In addition to parachutists flying through the legs of the monument, there have been multiple attempts to climb or parachute off the Arch. The first and most deadly incident occurred in November 1980 when 33-year-old Kenneth Swyers attempted to parachute from a plane to the top of the Arch and then base jump using his reserve parachute. Unfortunately, the wind blew Swyers sideways after landing, and he slid down the leg to his death.12 A month later, a local St. Louis television station reported that a parachutist wearing a Santa Claus costume jumped out of an airplane and landed on the Arch. The supposed stuntman reportedly grasped a beacon on the monument and then used the parachute to support his glide down the Arch’s leg. Police later determined that the report was, most likely, a hoax.13 In 1986, professional stuntman Dan Koko, who earned $1 million when he successfully dove 110 meters off the Vegas World Hotel in 1984, proposed free-diving off the Arch into a giant airbag, seeing this as the ultimate stunt. St. Louis officials nixed Koko’s plans.14 Then on September 14, 1992, John C. Vincent, who parachuted off the World Trade Center in May 1991, performed a successful climb of the Arch. The 25-year-old used suction cups to ascend the leg and then parachuted safely back to the ground after resting on top for over an hour. Vincent was arrested and charged with two misdemeanors.15

Rather than risk parachuting onto the structure, visitors can reach the viewing room at the top of the Arch in trams that travel inside the legs of the monument. Once there, visitors can see east across the Mississippi into East St. Louis, Illinois, and west into downtown St. Louis, Missouri, and the sprawling suburbs of the greater St. Louis region. With exception to the Mississippi River, little remains of what Lewis and Clark saw as they set out to chart America’s western territory in 1804. The Arch stands as a complicated representation to the nation. For some, the arch stands as a glorious testament to western expansion and progress; to others, the Arch represents the physical embodiment of displacement and racism. Which begs the question, how can progress be an equitable endeavor for all involved? 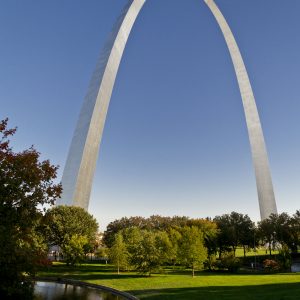 The St. Louis Gateway Arch, which towers 630 feet above the Mississippi River and the city that the river helped build, commemorates the 200th anniversary of the founding of St. Louis and the city’s role as the gateway to America’s westward expansion. The arch, designed by architect Eero Saarinen and architectural engineer Hannskart Bandel, sits … Gateway Arch National Park 1963 - Present