During the first half of the nineteenth century, German settlers came as groups, families, or individuals to Missouri. At the time Germany was not yet a united country but a conglomeration of duchies and principalities. As a result, these German immigrants differed in regional origin, social background, and religious persuasion and lacked a shared sense of national identity. Like their backgrounds, motives for leaving the homeland also varied. Some left because inheritance patterns had led to the splintering of land into small holdings that were economically unfeasible. “Economic misery” after series of failed harvests, the demise of the cottage textile industry, and declining standards of living convinced many to look for a better life elsewhere. Others aimed to evade military duty or left for religious or political reasons.1 What they brought with them was a common language and the shared dream of improved economic conditions and a new life in a free world.

Missouri became a popular destination for German immigrants in part because travelers to the state, such as Gottfried Duden, had written glowing reports during the 1820s about its land, waterways, and climate. Additional elements that contributed to the immigration to America and Missouri were improved accommodations aboard steamships that lowered expenses and the growing efficiency of emigration societies. For example, the Deutsche Ansiedlungs-Gesellschaft zu Philadelphia (German Settlement Society of Philadelphia) purchased land along the Missouri and Gasconade Rivers suitable for both agricultural and manufacturing pursuits and established the city of Hermann in 1837 to unite Germans in America into a colony where they could fully preserve German language, customs, and culture.2 By mid-century the most important factor that shaped the decision to cross the Atlantic was that more and more Germans had relatives in America who wrote letters to the old country describing land, opportunities, and personal experiences.3

The first sizable wave of German immigrants arriving in Missouri during the 1820s and the early 1830s included a few noblemen, scholars, preachers, artisans, shopkeepers, farmers, and liberal intellectuals who fled repressive measures after unsuccessful revolutions against undemocratic German governments during the early 1830s. They hailed primarily from southwestern and northwestern German regions and settled in St. Charles and Warren Counties. For example, Friedrich Münch, a Lutheran pastor, writer, farmer, and future state senator, and Paul Fellonius, a lawyer and revolutionary, brought members of the Gießener Auswanderungs-Gesellschaft  (Gießen Emigration Society) to Missouri and established the town of Marthasville in 1835. The topography of the green hills along the Missouri River reminded many of these settlers of the old Rhineland in western German regions.4

Several immigrants followed their religious leaders who wanted to secure greater freedom of worship.  In 1839, Martin Stephan and the Saxon Settlement Society brought a group of Lutheran clergymen and their congregations to Missouri to establish a religious community according to orthodox Lutheran principles. They established settlements in Altenburg and Wittenberg in Perry County along the Mississippi River, and those who moved to St. Louis provided leadership in the formation of the Lutheran Church – Missouri Synod.5 German Catholics came to Missouri for economic reasons as well as religious freedom. Many settled along the Mississippi River in Zell, New Offenburg, Weingarten, and Coffman in Ste. Genevieve County during the 1840s.6 In central Missouri, Father Ferdinand M. Helias, a Belgian-born Jesuit who was devoted to preserving the Catholic faith among German immigrants, established seventeen parishes during the 1830s and 1840s, including Taos in Cole County, and Westphalia, Rich Fountain, and Loose Creek in Osage County.7

Others came to Missouri to set up isolated ethnic agricultural settlements where they could preserve German culture. In 1844, Dr. William Keil founded the communal society of Bethel in Shelby County in northeast Missouri.8 Germans from the Kingdom of Hanover founded Cole Camp in Benton County and Concordia in Lafayette County. Members of both communities preserved their Lutheran faith and their distinct Plattdeutsch or Low German dialect for decades.9

The majority of German immigrants who came to Missouri before the Civil War arrived between 1845 and 1854.  So steady was their influx that by 1860 Missouri ranked sixth among the states in the size of its foreign-born German population.10 This group has been labeled as the “Forty-Eighters” because famous “refugees” such as Carl Schurz and Franz Siegel had participated in the failed 1848 Revolutions and fled political persecution. However, the legend of the Forty-Eighters overshadows the great diversity of this group of immigrants that included farmers, journalists, judges, physicians, professors, skilled craftsmen, merchants, and unskilled laborers who escaped economic crisis to improve their lives.11 For over one hundred years, German immigrants who settled in Missouri during the first half of the nineteenth century, established ethnically cohesive communities where they and their American-born children preserved German as their first language, memorized German nursery rhymes, recited bible verses in German, and participated in such German traditions as St. Nickolaus Tag, the Gastbitter, and the Wurstjäger.12 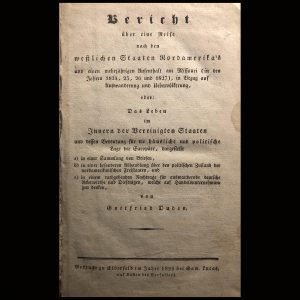 Gottfried Duden was one of the first German visitors to the newly established state of Missouri. After a four-year residency in Montgomery County during the 1820s, he published a glowing Bericht or Report about the region to persuade settlers to make the state their new home. He titled the document, Bericht über eine Reise nach den … Report on a Journey to the Western States of North America 1827