Robert Ritchie Robertson, born in Burntisland, Scotland, was deeply dedicated to the development and continuation of Springfield’s Boy Scout Band. His knowledge of musical instruments and his ability to teach student musicians were critical to the band’s early success. His musical talents developed from an early age in Scotland. His father, David, directed choirs in the community and encouraged young Robert to pursue music. As a result, Robert learned to play the flute, concertina, piano, and violin between the ages of 6 and 12. Young Robert became conductor of the town band at age 18.

On August 25, 1900, Robertson departed for America, and this may be the first time his Americanized name “R. Ritchie Robertson” appeared on a U.S. government record. In 1902 he moved to Paola, Kansas, and while there earned the alliterative nickname, the “Star Spangled Scotsman” due to his interest in American patriotic music. He was named music supervisor for the Paola, Kansas, schools in 1912. Robertson accepted a similar position with the Springfield Public Schools in 1916. Among Robertson’s first observations of Springfield were the choices of music played in the city; it was “saturated” with ragtime. He wanted to change the city’s musical focus to classical, patriotic, and other varieties of popular music. In 1920, in his capacity as supervisor of music in the Springfield schools, Ritchie was offered the opportunity to create a Boy Scout Band.2

Eventually, boys ranging from ages 12 to 18, participated in the band with the stipulation that they be registered members of the Boy Scouts. The boys played a varying repertoire of popular and classic music artistically. Will James of Martin Brothers Piano Company pointed out the Boy Scout Band did not play jazz numbers, only “clean, high-class music.” 4

In the late summer of 1921, Robertson announced the first expansion of band members and called for the first “Beginners Band” to meet on September 15. Seventy-five new boys showed up that day, ready for practice. As membership in the band grew, the need for a mid-level group was recognized as a way for band members to advance, especially those who needed slightly more time to polish their skills with their instruments before participating in public concerts. The result was a Monday night band for beginners, a Wednesday night band for intermediate musicians, and the Thursday night band was for advanced band members.5

In 1923, the Boy Scout Band began to earn regional recognition. On June 19, 140 members of the Boy Scout Band “created a furor” when they performed a concert at the International Rotary convention in St. Louis, serenading a distinguished Rotarian in attendance, President Warren G. Harding. The following day, the band members marched in a parade in St. Louis. While marching along Ninth Street during the Rotary International Convention Parade on June 20, the 125 Springfield Boy Scout Band members lost their march discipline. Bystanders along the street and onlookers from the Frisco Building enjoyed the band and their music so much that they showered the band with coins and dollar bills. Seeing the money landing at their feet and nearby on the street, the Boy Scouts stopped playing and broke ranks to collect the money. The wild scramble for cash halted the parade for about five minutes until Robertson and other scout leaders restored order. As the band started forward again, more parade attendees showered the boys with additional money. The dismayed Robertson shook his baton and roared out, “Forward, MARCH!” Though the temptation to pick up more cash was great, the boys reportedly followed their band leader’s direction.6

After the Fair ended, the Missouri State Fair Board members fondly recalled Springfield’s Boy Scout Band as the key attraction at the 1923 state fair. The Board members contacted Robertson, who then received an additional honor. On September 29, 1923, the Missouri State Fair Board sent a letter to inform the Springfield band of their intent to present a silver loving cup to the boys at a local celebration in Springfield. By the end of 1923, the Boy Scout Band emerged as a source of pride for the Springfield community and the state.8

In February 1924, the band greeted the world-famous bandmaster John Philip Sousa and the “best band in the land.” On February 5, a frosty and very snowy day, the “March King” and his band arrived by train in Springfield for an afternoon matinee and evening concert. Earlier that morning, Robertson and the Boy Scout Band had marched through heavy snow and waited three hours for Sousa’s late-arriving train at the Frisco Railroad’s passenger station. Then, to the sound of drums, the Boy Scout Band escorted Sousa and his band to their quarters at the Colonial Hotel. After unfreezing the valves in their instruments at the hotel, Robertson’s Boy Scouts played a short piece, Sousa’s own “Our Director,” and then cheered Sousa. Later, the boys made their way to the afternoon matinee concert at the Shrine Mosque, where Sousa invited them to attend as guests of his band. Future composer of The Music Man musical, Meredith Willson, accompanied Sousa’s Band as a solo flutist. The band members likely were just as impressed as Sousa with the Boy Scout Band’s determination to march through snow and endure cold temperatures, just to greet Sousa and the other band members that day.9

In 1924, Springfield’s Boy Scout Band began summer “Goodwill Tours.” These goodwill tours consisted of three-to-five-day trips sponsored by the Springfield Chamber of Commerce. These trips included up to forty-car caravans and were very popular into the early 1930s, particularly in rural towns where entertainment was rare. Typically, the band would drive to a small town, circle the square, and meet with town officials before a short concert. The band visited up to nine towns daily. By 1930, the “Goodwill Tours” resulted in performances in 160 Missouri towns.10

During 1928, the Boy Scout Band reached its peak enrollment at 440 members. During this period, Robertson composed his “Bluebonnet March,” which some consider his best composition. The music that the band composed was after the Frisco Railway’s coach in which the Boy Scout Band traveled for performances in Kansas City, Sedalia, St. Louis, Chicago, Memphis, and Dallas circa 1927-1928. On November 21, 1928, Robertson was invited to be a guest conductor when John Philip Sousa’s Band performed at Springfield’s Shrine Mosque. There, Sousa’s band debuted Robertson’s “Bluebonnet March.” Later, Sousa was a guest conductor for the Boy Scout Band. The boys played two Sousa compositions: “Solid Men to the Front” and “Semper Fidelis.” Sousa also presented a silver cup to Robertson for his musical achievements and evolving the Boy Scout Band at the concert.11

The Boy Scout Band’s illustrious reputation continued through the 1930s. Even during difficult economic times of the Great Depression, the community’s support of the Band continued. For example, the band was slated to perform at the Texas Centennial in Dallas in 1936 but did not meet its undraising goals. Frisco railroaders came forward with a last-minute cash contribution of $240, ensuring the band had $900 to cover their round trip expenses. On June 16, the Boy Scout Band, designated as the official Missouri band for the Texas Centennial, paraded through the Centennial’s 200-acre Fair Park Complex in Dallas. They passed President Franklin Delano Roosevelt, the second president to view them in person.

In the early 1940s, the Boy Scout Band adapted to the changing times. The United States’ entry into World War II resulted in the band’s shift from musical focus to mostly patriotic scores. The band’s sterling reputation was honored in February 1944 with a distinguished service citation from the Music War Council of America.13 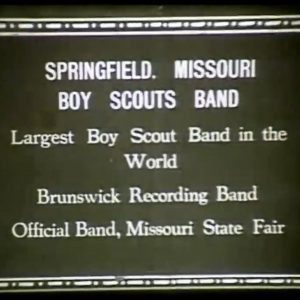 Springfield was home to the world’s largest Boy Scout band, led by R. Ritchie Robertson, a music teacher at the then-Springfield High School. Established in 1920, the band had 400 members at the height of its success. The band quickly grew in fame, and over the years, performed before several distinguished individuals, including John Phillips Sousa and … Springfield Boy Scout Band 1920 - 1949