Slightly more than half of German immigrants who came to Missouri during the nineteenth century chose St. Louis as their primary destination. The majority of St. Louis Germans initially came from southern and western Germany, where economic and social upheaval had been the most intensive and devastating.1 These German immigrants were not destitute peasants but professionals, skilled craftsmen, and unskilled workers in search of economic improvement, better wages and ownership of businesses. Carpenters, coopers, shoemakers, tailors, bakers, brewers, stonemasons and bricklayers applied their learned trades in their adopted homeland and filled the high demand for skilled labor in the rapidly growing city, adding to its diversity of economic and social classes. A sizable number of them quickly owned real estate in the form of either a personal business or home or as land for development.2

The “Forty-Eighters” also preferred the city and most of them settled in St. Louis County during the early 1850s to take advantage of lower housing costs, yet be close to the city’s market and the opportunity for employment as artisans, teachers, journalists, and politicians. By 1880, the majority of Germans coming to St. Louis were displaced farm laborers or urban workers from northern Germany who pursued manufacturing and mechanical occupations. Ludwig Dilger, for example, indicated to his family in Germany that St. Louis offered excellent opportunities for masons, carpenters, and wheelwrights.3

The economic opportunity in St. Louis and its rich farming hinterland also provided temporary employment for needy newcomers who had enough savings to pay for the voyage across the Atlantic but not enough to purchase land. Single travelers or newlywed couples often lived in the city on the way to the farm. Mutual aid societies, such as the Deutsche Unterstützungs Band (German Aid Society) and the Deutsche Gesellschaft (German Society) of St. Louis, assisted new arrivals with finding employment, provided access to hospital care, aided with burials and assisted with arrangements for those who wished to continue their journey farther west.4

Initially, Germans settled in the northern and southern wards of St. Louis, but by 1900 Germans lived throughout the city. They took advantage of the social and geographic mobility of an open society and different class, religious, and regional backgrounds as well as diverse economic and social ambitions encouraged such movement. The 1912 edition of The Book of St. Louisans, noted 292 individuals born in Germany who had become successful doctors, educators, bankers, journalists, politicians, and businessmen, including Herman Kroeger, the founder of Kroeger-Amos-James Grocery Company.5 Military heroes of German birth, who made St. Louis their home, included Union officers Franz Sigel and Peter Joseph Osterhaus.6 Among the notable politicians with national fame was Richard Barthold, who served as United States Representative for St. Louis between 1892 and 1915.7 Carl Schurz, publisher of the Westliche Post, served as United States Senator from Missouri between 1868 and 1874, and accepted the appointment as President Rutherford B. Hayes’s Secretary of Interior in 1877.8 Several German-born men became mayors of St. Louis, including Henry C. Overstolz and Henry Ziegenhein, the latter despite his broken English.9

One of the biggest German success stories of St. Louis was the creation of the Anheuser-Busch Brewing Association. In 1857, Eberhard Anheuser, who had already established a successful soap factory, bought the failed Bavarian Brewery and through the managerial assistance of his son-in-law Adolphus Busch turned the local brewery into an international business.10 Indeed, by the turn of the century, Germans essentially monopolized the brewing and malting business in St. Louis.

The children of German immigrants also became successful and famous. Charles Nagel, son of German parents, became a well-known lawyer, served in the Missouri House of Representatives during the 1880s, became the Republican Party National Committee chairman in 1908, and served as Secretary of Labor under President Taft.11

German immigrants and their descendants certainly left a lasting impact on St. Louis. The actions of German-born volunteers on May 10, 1861, at Camp Jackson kept Missouri in the Union during the Civil War.12 Susan Blow established the first public kindergarten in the United States in St. Louis in 1873.13 During its long history between 1859 and 1924, the German Theater Society produced such plays as Der tolle Wenzel and the Schützen König. German immigrants also established social and cultural clubs such as Sängerbünde (Singing Societies), Turnvereine (Gymnastic societies), and Bier Gärten (Beer Gardens).14These clubs and organizations served as the core of the German-American social season and sponsored dances, plays, and musical performances.

Although these clubs gave the public the impression of ethnic unity, such oneness is deceiving because regional origin, specific social limitations, or occupational requirements often restricted membership in these clubs and societies. Fragmentation and disagreements existed from the early days of immigration because Germans were very diverse in intellectual background, religion, social class, education, and attitudes.15 German singing societies in St. Louis that survived into the twentieth century included the Schwäbischer Sängerbund (Swabian Singer Union), Bayerische Männerchor (Bavarian Men’s Choir), Rheinischer Frohsinn (Rhenish Cheerfulness) limited membership to geographic origin.16 Even mutual aid societies, such as the Badische Unterstützungs Verein (Baden Aid Society), required evidence of common geographic origin for membership.17 Class or occupation also influenced in what choir one would sing or to what society one belonged.18

Religion, in particular, was a divisive rather than uniting factor for Germans in St. Louis. The majority of Catholics and Lutherans who arrived during the 1830s and 1840s were conservative. These “Grays” resented the newcomers, or “Greens,” who arrived in the 1850s. Among them were freethinkers, who were liberal and believed that free thought was the basic requirement for true freedom. Freethinking editors openly expressed anti-clerical thoughts in newspapers, such as the Anzeiger des Westens, that opposed Catholics as well as Lutherans, the Concordia Seminary, and their conservative political stand.19

Neither were the Germans of St. Louis united politically. Most quickly adjusted to the American two-party system and chose their affiliation with either the Democratic or Republican Party according to religious beliefs and personal, economic, and ethnic needs. For example, most Catholics supported the Democratic Party and numerous factory workers voted for the Socialist Party.20

The German-language newspapers published in St. Louis over time also reflect this political and ideological split. Whigs established Die Deutsche Tribüne but it became a Democratic paper in the early 1850s. The Freie Blätter served as a freethinking publication for Forty-Eighters. The Amerika, published between 1872 and 1924, has been called one of “the best of all German Catholic papers in the United States” and supported the Democratic Party. The St. Louis Arbeiterzeitung represented the Socialists. The Westliche Post became the most respected Republican German newspaper west of the Mississippi.21

The degree of acculturation varied widely in St. Louis because, as Germans adjusted to life in America, they had to adapt, transform, and mold their ethnic consciousness according to their individual circumstances and needs. Economic expansion, class mobility, political participation, and social acceptance were some of the many factors that influenced the creation of the German-American identity in St. Louis. Daily economic and social interaction with Americans and other ethnic groups required adoption of English and discouraged second and third generation German-Americans from maintaining their parents’ language. The German language survived the longest in churches because many pastors believed that truth could only be learned through the German language. To maintain knowledge of German, Catholic and Protestant churches in St. Louis established parochial schools where German was not just a subject but where many classes were also taught in German. Nevertheless, German was declining during the 1910s because American born children and grandchildren began to demand sermons in English. The German Lutheran Holy Cross Church, for example, introduced English evening services on the second and fourth Sunday of every month in 1909.22

By contrast, children attending public schools could still receive German language instruction in reading, writing, and speaking through second or third grade. Beyond that all classes were in English. This encouraged the children of German immigrants to learn English at an early age but also offered English-speaking children the opportunity to learn rudimentary German. This policy was popular and so successful that the study and use of German in public declined by the early twentieth century.23

By the turn of the century, the adoption of the English language would have been looked upon as becoming American. One example is Henry W. Kiel, the mayor of St. Louis, who had to apologize during the German Day festivities in the city in June 1913 that he was no longer able to address his fellow German-Americans in his parents’ native language. German culture and identity, however, continued to exist through occasional German services in churches and an interested person could still learn the German language. The German theater fulfilled the need for intellectual stimulation and several German clubs and organizations offered ample opportunity for socializing. The two vibrant newspapers, the Westliche Post and Amerika, informed Germans in St. Louis and surrounding areas with news about the city, state, nation and Germany in the German language, thus representing strong evidence of Deutschtum in St. Louis.24 English-language newspapers in St. Louis cited the examples of Carl Schurz, Franz Sigel, and Adolphus Busch to argue that German immigrants and especially their children had assimilated and, “had been interwoven with our composite national fiber…[and] had been transformed into Americans.”25 Editorials discussing the unveiling of the “Naked Truth” Memorial to three distinguished German-Americans in 1914, celebrated their lives and argued that their dedication to freedom furthered American history as well as represented the best of German culture and should serve as inspiration to immigrants already here and those still to come.26 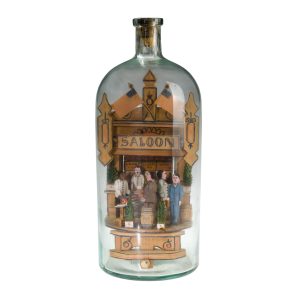 Carl Worner, a German immigrant, was a drifter and traveling artisan. At a time when unemployment was high, immigrants like Worner were able to support themselves by applying their whittling and artistic skills to carve dioramas or scenes of businesses displayed in a bottle. The scene in this “bottle whimsy” created by Worner in 1908 … Saloon Diorama Bottle 1910

Kamphoefner, Walter D. “Learning from the ‘Majority-Minority’ City: Immigration in Nineteenth Century St. Louis.” In St. Louis in the Century of Henry Shaw: A View beyond the Garden Wall, edited by Eric Sandweiss, 79-99. Columbia: University of Missouri Press, 2003.