The loyalties of Missouri’s German American residents became suspect after the United States entered the Great War on the side of the British and French in April 1917. Most people of German descent actively worked to convince their neighbors of their allegiance to their adopted nation rather than their nation of birth. Federal laws increasingly targeted those that were deemed not to have sufficiently demonstrated support for the U.S. war effort against Germany. Cartoons like the above published in the St. Louis Republic aimed to convince readers that the German-language press in the United States did not provide education but instead served as tool for German propagandists. Although the publisher and editor of the newspaper appreciated the contributions of Germans like Friedrich Wilhelm von Steuben and Carl Schurz, by April 1918 they also initiated a city-wide campaign to rename offensive-sounding German street names with American names. For example, Berlin Avenue became Pershing Avenue and Kaiser Street became Gresham Street. This effort to eradicate historic vestiges of one of St. Louis’s and Missouri’s most important immigrant groups with met with little resistance due to people’s fears of being accused of disloyalty to America.1

After the United States entered the Great War in April 1917, persons of German and Austrian origin experienced pressure to demonstrate their loyalty to the United States owing to national, state, and local war mobilization efforts. German American men enlisted in the military, registered for the Selective Service Act, served when drafted, or if too old, participated in the Home Guard, a volunteer organization that replaced the National Guard after it had been federalized into active service. Families bought Liberty Bonds, purchased War Savings Stamps, conserved food, and joined the Red Cross. Most did so to express their heartfelt patriotism; others deliberately appeared loyal to distract attention from their ethnicity. Those who openly expressed pro-German sentiments experienced the direct impact of the law or vigilante justice.2

Federal laws directly affected German Americans. Congress defined immigrants from Germany and Austria who had not yet become naturalized citizens as “alien enemies” and required that they register with federal authorities. In Missouri, 5,890 men and 2,684 women registered, including several American-born women who had married German-born men and, according to the 1907 Naturalization Law, had acquired their husbands’ nationality.3

The Trading-with-the-Enemy Act required that publishers of foreign language newspapers, such as the Missouri Volksfreund in Jefferson City and the Westliche Post in St. Louis, report to local postmasters translations of articles related to the war and the national government. Publishers who refused lost second-class mailing privileges. Consequently, several German-language newspapers, including the Osage County Volksblatt in Westphalia, had to close.4 This act also established the position of the Alien Property Custodian who had the authority to confiscate the property of any German citizen living in the U.S. or American residing in Germany. The custodian took ownership of companies in St. Louis, St. Joseph, and Kansas City. The Busch family from St. Louis had personal experience with this law because two American-born daughters of Adolphus Busch had married German men and lived in Germany. Their mother Eliza Busch, who was visiting in 1914, decided to stay, and offered property she owned in Germany for use by convalescing German soldiers. The custodian took possession of her inherited estate in St. Louis and California because her actions aided the enemy. Mrs. Busch regained most of her property when she returned to the U.S. in December 1918.5

Federal legislation also impacted the freedom of speech. The Espionage Act of 1917 outlawed any action that could interfere with the military, and the Sedition Act of 1918 aimed to control dissent. Both led to the arrest of anyone, especially German Americans, who expressed pro-German or anti-American thoughts. Severity of punishment, however, varied. August Weist, deputy collector for St. Louis, had to pay a $200 fine for allegedly stating, “Our boys have no damned business being over there….The government has no damned business conscripting our boys over here.” By contrast, August Scheuring, a German-born resident in St. Louis, received a two-year prison sentence at Fort Leavenworth because while riding in a streetcar and sitting across from uniformed soldiers he allegedly said that “the Kaiser will win the war.”6

State and county authorities had an even greater impact on the lives of German Americans because they classified disloyalty based on local relationships and decided how to punish perceived disloyal behavior. The Missouri Assembly had ended its biennial session in April 1917, and Governor Frederick D. Gardner did not perceive the need for a special session. Instead, he followed National Council of Defense guidelines and appointed the Missouri Council of Defense as the agency in charge of mobilizing the state. Gardner intended to instill patriotism by calling upon Missourians to be, “ready to cooperate, ready to sacrifice, ready to suffer,” and that, “this is no time for slackers…it is our duty to drive them out and brand them as traitors.” In April 1918, he declared that all pro-Germans were German spies and that he was willing to establish martial law if he discovered them. The governor and state council also charged county and township councils with the responsibility of meeting mobilization quotas and controlling dissent.7

Local enforcement of the war effort varied and depended on the degree of how patriotic a community should appear. After Fritz Monat, a German-born socialist, had made pro-German remarks in Jefferson City and his association with militant labor unions threatened to destabilize local labor relations, a “committee of citizens” administered on him a public flogging and forced him to kiss the American flag. When Paul Paulsmeyer expressed derogatory opinions about Red Cross nurses, the draft board in Osage County rescinded his exemption from military service. “Intensely and aggressively patriotic” German Americans in Gasconade County, who were fearful that the county gain the “slacker” label, coerced fellow German speakers to more enthusiastically support the war effort and keep any critical opinions to themselves. Their efforts also resulted in the renaming of the town of Potsdam to the more patriotic sounding, Pershing.8

Removing references to anything obviously German, including the enemy’s language, turned into the primary function of local authorities. The Cass and Linn County Councils of Defense, for example, banned the use of German on the telephone. Several councils passed resolutions stating that speaking in German in public was unpatriotic. In St. Louis, city officials and English-language newspaper editors suggested that German-language newspapers should close and that German sounding street names should be changed to American names. These local efforts convinced the State Council to pass a resolution in August that encouraged all Missourians to speak only English.9

During World War I, national legislation, state organizations, and local authorities created suspicion of everything German, including those who still used the German language. The German American experience on the home front during the conflict was not uniform. Many temporarily adjusted to the demand to appear patriotic to divert attention from their ethnicity. In some cases, names of businesses, towns, or streets were changed. A few reported fellow German Americans to the authorities. In Missouri, physical violence against German Americans was rare and limited to those who publicly flaunted their support for Germany. 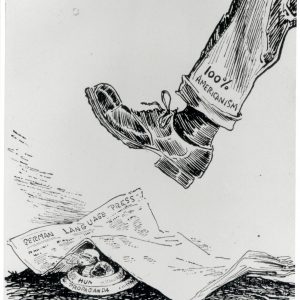 Cartoons like this published in the St. Louis Republic aimed to convince readers that the German-language press in the United States did not provide education but instead served as a tool for German propagandists. Although the publisher and editor of the newspaper appreciated the contributions of Germans like Carl Schurz and Friedrich Wilhelm von Steuben, … “Step On It” Political Cartoon 1918