Have you ever wondered why roads end up where they are? The obvious answer is somebody wanted to go from where they were to a new place. Familiar roads, such as the Oregon and Santa Fe Trails, are part of the popular history of the United States. Another road, an integral part of westward expansion that has been forgotten, is the Old Wire Road. Like the Santa Fe and Oregon Trails, this trail started in Missouri and ran from St. Louis to Springfield through Rolla and then southwest through Cassville, Missouri to Fort Smith, Arkansas. The Old Wire Road took a different path from other roads West, dipping south to avoid the Rocky Mountains and ultimately ending in California. A southern route brought unique dangers and challenges such as semi-arid terrain, limited water options, and even fewer opportunities for shelter. However, missing the mountains en route to California made the road an attractive risk with a prospect for high reward. Running through the interior of Missouri, the Old Wire Road has a unique tale that spans centuries and takes us through many meaningful historic events that shaped Missouri’s history.

When forging trails and roads, humans and other animals typically take the path of least resistance. Early Missourians used the Missouri and Mississippi Rivers and their tributaries to traverse the state, but in order to travel through what we now know as the Ozarks, the trails that became the Old Wire Road were almost the only option. The original route was created by Indigenous Americans, predominately the Osage, who followed trails created by large game, along what is now known as the Ozarks Plateau. The first non-Indigenous people, such as Spanish explorers, French traders and trappers, and European American settlers from Kentucky and Tennessee, used these same trails to enter the Ozarks region. The trails also allowed these newcomers to extract and exploit the area’s many natural resources.1

The trails were not entirely stable and were not always easy for travelers. Flooding and other natural events often forced changes in the route and travelers on foot encountered rugged terrain. Often, people who traveled the route had to cross multiple waterways along their way. Those on horseback had an easier time as they could move faster and were able to cross streams and rivers much more easily, although a trip along the trail was still quite arduous. The emergence of wagon use in Missouri necessitated the construction of better and more stable roads and the needs of the large vehicles often required taking a slightly different course than the original trails. The state government finally consolidated multiple trails into an official road in 1836, part of which is now the Old Wire Road.

The Old Wire Road also played a part in the forced removal of the Cherokee Nation from their ancestral lands in 1838. The Cherokee people were originally located in North and South Carolina, Georgia, and eastern Tennessee, but the United States government forced them to leave their homes and move to “Indian Territory” (present day Oklahoma). The Cherokee people were forced westward along a route now known as the “Trail of Tears.” The Cherokee entered Missouri near Cape Girardeau and traveled overland through Farmington and Potosi, eventually meeting up with The Old Wire Road in Rolla. Headed by federal guides called “conductors,” the Cherokee traveled roughly ten to fifteen miles each day on foot, in often brutal winter conditions. At least one fourth of the Cherokee Nation died as a result of this forced migration.2

In 1857, John Butterfield’s Overland Mail Company was awarded a federal contract to provide transportation of the mail from St. Louis, Missouri to San Francisco, California. The route that Butterfield developed and operated covered over 2,700 miles and used stagecoaches to move both mail and passengers starting in 1858 and ending in 1861, at the start of the Civil War.3 The Missouri portion of the route began in St. Louis, traveled west to Tipton, Missouri, by railroad, by road south to Springfield and Fort Smith, Arkansas, and then west to California. When the first telegraph line in Missouri was built in 1859, it utilized the same route. The road soon became known locally as the Old Wire Road because of the telegraph wires that were strung parallel to it.4

In 1859, construction began on the Central Division of the Atlantic and Pacific Railroad. In order to take advantage of the natural resources of iron, lead, and oak, the railroad followed the corridor of the Wire Road from St. Louis to Springfield. By 1860, the railroad had reached Rolla, Missouri, and when the Civil War began in 1861, Rolla became a major supply depot for the Union Army; as people and supplies moved between St. Louis and Rolla via the railroad. The Union army installed a new telegraph line, paralleling the railroad tracks from St. Louis to Fort Smith. Travel from Rolla to Springfield continued by foot and wagon for another 12 years due to disruption in construction of the rail line as a result of the war.

Over time, the Old Wire Road has been called by many names – The Great Osage Trail, The St. Louis/ Springfield/ Fayetteville Road, Highway 14, and Route 66. The road’s most iconic moniker is the Old Wire Road, due to the telegraph lines that followed along it. In the nineteenth century, the telegraph was as innovative as the internet is today. It allowed for quicker communication for news, business, personal messages, and train arrival times. The route is still often referred to locally as the Old Wire Road, even though today I-44 is the U.S. Department of Transportation’s official name for it on the map.6 Although the interstate does not take the exact route of the Old Wire Road, the highway continues to follow the railroad line from St. Louis to Springfield, connecting towns along the way and playing an important role in Missouri’s history. 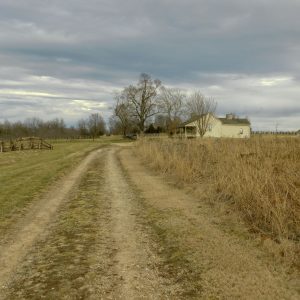 After Missouri became a state in 1821, the U.S. Army began searching for a road to connect St. Louis and Fort Smith, Arkansas. The route they established followed a path used by Osage Indians and was commonly known to Missourians as the “Military Road,” or the “Fayetteville Road.” From 1858 to 1861, the Butterfield Overland Mail Company … Wire Road 1836 - 1922