Union Station currently sits as the centerpiece of the Kansas City skyline. Thousands of visitors from across the metropolitan area and country admire its architectural beauty and world-class exhibits every day. However, four short decades ago in the 1980s, the future of the once-thriving railway station stood unclear. Plagued with the decrease in railway travel, Union Station remained vacant and deteriorating for years. As Kansas City’s downtown experienced disinvestment and neglect, Union Station stood as an “eyesore” with empty train tracks and boarded windows. Narrowly escaping demolition multiple times, the building was eventually given a glimmer of hope when a $234 million renovation was approved in 1996. Today, Union Station serves as one of Kansas City’s most identifiable landmarks and provides a window to trace the rise and fall of Kansas City throughout the twentieth century. From its unique architectural features to its repurposed uses, Union Station plays an important role in the history of Kansas City and Missouri.  Inside the walls of Union Station lies over a century of history that features the stories of millions who passed through the station. From soldiers leaving for World War I and World War II, to modern passengers arriving to visit loved ones, every train ticket and passenger has a story.

In the aftermath of the Civil War, Kansas City began to emerge as an important railroad hub. This was largely due to the completion of the construction of the Hannibal Bridge, the first railroad bridge across the Missouri River, in August of 1869. Urban Historian Charles Glaab observed that this first bridge, “has served as the city’s special symbol…the key to its success and a tribute to the bold resourcefulness of a small group of inspired city fathers.”1 Boosters of Kansas City in the tension-filled decade prior to the outbreak of the Civil War, as well as in the chaotic postwar period, pushed for railroad construction as a means of building their community.2 As a result of the completion of the Hannibal Bridge, Union Station’s predecessor, Union Depot, opened in Kansas City’s West Bottoms district in 1878. Over 180 trains passed through the depot daily. Union Depot’s location, however, quickly became a problem. While its site in the West Bottoms facilitated the transportation of cattle and other goods, the area was prone to flooding and the station was surrounded by “less desirable” landmarks such as gambling saloons and brothels.

The various issues with the West Bottoms location led city officials to decide to build a new train station in a new location. The station found its new home when twelve conjoining railroad companies committed to the project.3 The valley at 25th Street and Grand Avenue was chosen for the station due to its central location and high floodplain. Construction began in 1911, spearheaded by designer Jarvis Hunt, a trailblazer of the City Beautiful Movement.4 The building was designed in Beaux-Arts style with large arches throughout the grand hall to brightly illuminate the area. Other features included marble floors and ornate decoration. Construction took three years and heavily relied on the work of immigrants. Many Irish immigrants spent countless hours laying down railroad tracks and excavating the needed land. Without the help of immigrant labor, the station would not have been completed so swiftly.

Union Station opened on October 30, 1914. The 850,000 square footage building included nice floors of offices, a grand hall, ticketing stations, shops, and restaurants, including the Harvey House. The main headquarters for the Harvey House chain, which was founded by Leavenworth resident Fred Harvey and included restaurants and hotels along rail lines throughout the western United States, was located in Union Station.5 The building featured 95 foot high ceilings engraved with ornate moldings and showcased three chandeliers that weigh over 3,500 pounds. Three large arches defined the grand hall, with a grand central clock hanging from the ceiling in the middle of the station.  The clock was a prominent meeting point for both Kansas Citians and visitors. These spectacular architectural details are still on display today. The station boomed with the sounds of thousands of passengers and guests, peaking during World War I with 79,368 trains passing through the station. For instance, in one day, 271 trains journeyed through the station. Soon, it became the heart of railway transportation for the entire Midwest. During this time period, Union Station in Kansas City was the second busiest train station in the entire country, only after New York City.

Unfortunately, excitement for the popular station and its attractive architecture was quickly met with tragedy. On June 17, 1933, the station became the site of what became known as the Union Station Massacre. Two FBI agents and the chief of police from MacAlester, Oklahoma apprehended Frank Nash, an infamous bank robber with links to organized crime who had escaped from the United States Penitentiary in Leavenworth, Kansas, two and a half years earlier.  They transported him by train from Fort Smith, Arkansas to Kansas City, where they planned to turn him over to Reed E. Vetterli, the special agent in charge of the Kansas City FBI office.6 Kansas City policemen were present to reinforce them as they moved through the station and made the transfer. As the law officers loaded Nash into a waiting Chevrolet parked in front of the station, gangsters fired shots toward them in an attempt to free Nash. The suspected shooters included Charles “Pretty Boy Floyd” Arthur, Vernon Miller, and Adam Richetti.  Their attempt to free Nash failed when they killed him along with four law enforcement officers in the shootout. Gaining national attention, the incident led Congress to grant more protective power to the FBI.7 This resulted in the agency being permitted to carry protective firearms and make arrests.

Union Station became an important site during WWII. The station began to grow throughout this time as it was vital in Kansas City’s mobilization for war, just as it had during World War I. In 1945, passenger traffic hit a record 678,363 passengers as thousands of soldiers were traveling home from war.

The evolution of transportation in the postwar years shifted the role of Union Station. As air travel, the interstate highway system, and Americans’ love of owning cars became more prevalent and popular, railway travel began to decline. Similar to other train stations across the country, Kansas City’s Union Station lost its appeal and need. By 1973, only six trains operated, transporting about 32,842 passengers daily.8 With less foot traffic, retail shops and restaurants such as Fred Harvey Company, the Westport Room, and the Lobster Pot closed. In 1985, Amtrak ceased its services out of Union Station, ushering a period of decline and deterioration for the building.

In an effort to save the station, Kansas City officials partnered with Trizec, a Canadian firm, to redevelop the structure and the surrounding freight house area that was also facing decline. This proved to be unsuccessful, as Trizec made no meaningful improvements to Union Station. As the abandoned building continued to deteriorate, many advocated for its demolition. Union Station, a site that once represented the pride of Kansas City, became an “eyesore” in the city’s skyline.

Kansas Citians, however, did not give up on saving this once-thriving building. In order to save and redevelop Union Station, Kansas City approved a first of its kind, a “bi-state” tax which included five Missouri and Kansas counties in the Kansas City metropolitan area. This initiative raised funds for a $250 million renovation completed on November 10, 1999. The newly unveiled Union Station included shops, restaurants, theaters, exhibits, and Science City, which is a children’s science museum.9 Union Station has since hosted world-class exhibits, civic organization offices, live televised programs, and community events. The restoration of the building also attracted the railway company Amtrak to return and operate their routes through the station.

The history of Union Station provides a glimpse into Kansas City’s story as well as reflects national trends: a booming transportation hub, a city facing postwar urban decline, and recent revitalization efforts in cities across the United States. Union Station is beloved by Kansas Citians residents and has become a nationally recognized historic landmark and one of the defining sites of Kansas City. Today, Union Station still functions as one of the most utilized train stations in Missouri. Whether dropping off a loved one on their train departure to seeing a thrilling exhibit, everyone who steps into Union Station has a story of their time there, as did the millions before them. 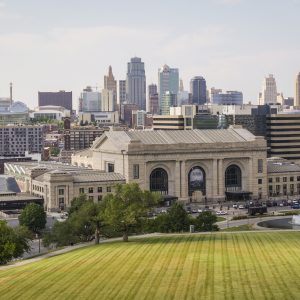 On October 30, 1914, Kansas City’s Union Station opened to the public before a crowd of 100,000 people. Designed by the Chicago-based architect Jarvis Hunt, the Beaux-Arts style building is perhaps the city’s best representation of the City Beautiful Movement. Union Station is over 850,000 square feet and features ornate ceiling details, a grand hall, … Union Station Kansas City 1914 - Present

“About Us.” Union Station. https://www.unionstation.org/about.