During slavery and for years after, white Missourians often boasted that their state’s border location rendered slavery milder than down river in the Cotton Kingdom of the Deep South. They often pointed to Missouri’s more temperate climate, a less arduous work regime, and the “domestic” relations of slavery in a state with few large plantations as points in defense of a more benign system of slavery. Memories of formerly enslaved Missourians, such as abolitionist William Wells Brown, soundly dispute these assertions. Brown and many others described the multiple abuses and injustices of slavery in a manner that echoed accounts of enslaved people from throughout in the South. Both geography and demography influenced the development of slavery in Missouri in ways that differed from slavery on cotton and sugar plantations but the institution was by no means less exploitative or abusive than elsewhere.

There was a long history of slavery in the region that pre-dated American settlement. French settlers brought the first enslaved Africans to Upper Louisiana during the early eighteenth century to work in their mining, trapping, and agricultural ventures. During nearly a century of French and Spanish rule, a complex multicultural and multiethnic society developed in which enslaved people played an important role. Although a few had emigrated in the 1790s, after the United States purchased Louisiana from France in 1803, an influx of American settlers, most hailing from Kentucky, Tennessee, North Carolina, and Virginia, migrated to Missouri in large numbers, many bringing enslaved people with them. The region emerged as a destination for migrants from the Upper South in the years following the political compromise that resulted in Missouri’s admission as a slave state in 1821. By 1850, slaveholders had settled in all Missouri counties, but a vast majority resided along the Missouri and Mississippi Rivers in order to take advantage of the fertile bottomlands and the transportation opportunities provided by the river systems. These southern migrants replicated the diversified farming and small-scale slavery practices of their original backcountry homes, producing wheat, corn, tobacco, hemp, and livestock, for both home use and sale in national and international markets. Plantation slavery never developed in Missouri on a large scale.  As late as 1860, only four percent of Missouri slaveholders claimed 20 or more enslaved people and less than one percent owned 50 or more. With the exception of Delaware, Missouri had a larger percentage of enslaved people living on small-scale slavery operations than any other slave state.

The demographics of small-scale slavery affected the relationships between enslaved people and those who commanded their labor as well as the family and community experiences of enslaved people. Overseers were rare in Missouri and most slaveholders directly supervised and worked with enslaved people in their homes and fields. The close proximity in which black and white Missourians lived and worked increased the opportunities for them to profoundly influence one another’s lives. In Missouri, as elsewhere, White Missourians had the upper hand in power relations, yet intimate knowledge of enslavers’ personalities provided some enslaved people with the means to resist their authority and in some cases favorably alter their circumstances. But more often, the close living conditions on farms undermined the quality of enslaved people’s lives and exposed them to the worst forms of abuse. Enslaved Missourians enjoyed little privacy and some enslavers directly interfered in their personal lives. Household relations could be volatile, often resulting in violent confrontations and extreme and devastating psychological, physical, and sexual abuse.

Systemic factors of small-scale slavery in a border state also played a key role in the quality of enslaved Missourians’ lives. Hiring was an important component of the labor market in antebellum Missouri. White Missourians who claimed more enslaved workers than they could profitably employ in their own farms or businesses hired them out to local farmers, manufacturers, and businesses, providing flexible use of their labor force and a source of revenue from workers who otherwise would have been underemployed. It was common for non-slaveholding whites to hire enslaved women and children to work as domestics in their homes as well. In addition, enslaved individuals were hired out when estates were in probate and to provide steady income for widows and minors. Hiring also allowed Missouri enslavers to off-load the expense of clothing, food, and medical care of enslaved workers onto hirers’ accounts.  While hiring assignments might grant enslaved people greater freedom of movement, the opportunity to acquire specialized skills, and occasionally a chance to earn cash through temporary work for white neighbors, hiring more often was a negative experience. Those who were leased were routinely separated from their family members, including young children from their parents, and despite agreements that theoretically protected against abuses, many were worked harder and were treated more harshly.

The preponderance of small-scale slavery in Missouri worked in other ways to undermine enslaved people’s social interactions with others. Most enslaved Missourians lived on farms with only a few other enslaved individuals, thereby compromising their ability to consistently access crucial support systems, such as a resident nuclear family or a slave-quarter community. The limited availability of potential spouses on most slaveholdings forced enslaved men and women to find partners on neighboring farms. Well over half of marriages between enslaved men and women were cross-farm or “abroad” unions. These unions were not sanctioned or protected by law but they were recognized by the black and white community as marriages.  Husbands and fathers were generally allowed by slaveholders to travel to visit and stay with their families at least once a week, typically on Saturday evenings and Sundays.  Abroad men were challenged to provide for their families emotionally and economically when most spent so little time with them. For much of the week, enslaved women cared for their children’s needs as the primary caregivers, disciplinarians, providers, and protectors. In spite of the limitations, many couples, such as Spotswood and Orry Rice, forged strong family ties that often lasted many years.

Enslaved Missourians also rarely benefited from a plantation slave-quarter community. Some suffered devastating isolation and most had limited access to enslaved individuals outside their own farms on a daily basis, but a vast majority used their little free time to create vibrant social networks within local neighborhoods. In counties with large enslaved populations, people met in town, at church, at work parties or weddings, or when hired out. Enslaved men traveled throughout the countryside, running farm and household errands, working for others, and visiting their wives and children; enslaved women frequently attended religious services at local churches and social gatherings along with men. White Missourians often sanctioned enslaved people’s social interactions with others, understanding that the smooth functioning of slavery and the natural increase of the enslaved population depended upon the viability of abroad slave marriages and inter-farm slave communities. There were frequent work-related “frolics,” such as corn huskings and building raisings, held in the community on many weekends.  These gatherings augmented the size of the limited work force found on most Missouri farms and white Missourians were happy to provide food and a dance in exchange for free labor.  Enslaved people were happy to socialize with friends and neighbors at these events but they understood that their price of attendance was their labor and vigilant supervision from white attendees. Many enslaved people were more interested in socializing on their own terms and they frequently risked running afoul of the local slave patrol by clandestinely meeting in the woods or abandoned buildings for gambling parties or dances.

While the vast majority of Missouri slaves lived in the countryside, enslaved and free blacks were a vital presence in the growing city of St. Louis. The urban setting provided them with opportunities for increased mobility and forging connections with others in the black community. They were employed at a number of occupations in the bustling commercial and manufacturing center, including skilled trades such as blacksmithing, carpentry, or work as a seamstress as was the case of Elizabeth Keckley. Large numbers of free and enslaved blacks also worked on the docks and riverboats that plied the waters of the Missouri, Mississippi, and Ohio Rivers, lending an air of transience to the city’s black population, and also enhancing chances for some to successfully reach free soil. The expansive hiring system also presented opportunities for others, such as Keckley, to earn money for extra work and eventually purchase their freedom.  The large number of free black St. Louisans (in comparison to the rest of the state where their numbers were few) led to the establishment of black-centered churches, schools, and social organizations for the benefit of both free and enslaved people, although their activities were often circumscribed by the surveillance of white residents and laws that forbade teaching enslaved people to read and write.

During the tumultuous years of the Civil War, enslaved Missourians took advantage of their vast knowledge of the local geography, their astute understanding of the political divisions among White Missourians, and the many family and community connections gained during slavery to bring about their liberation from bondage. Missouri’s traditional ties to the South were transformed in the decades preceding the war as agricultural practices and the railroad increasingly linked the state to the North and as migrants from free states and European nations, some who opposed slavery, moved into the state in the 1840s and 1850s. The end result was deep political divisions in the state during the Civil War. The residents of Missouri found themselves in the cross hairs as Union troops occupied the state and a Confederate guerrilla insurgency emerged to counter it.  Ultimately, tens and thousands of Missouri’s nearly 115,000 enslaved individuals fled to nearby Union army encampments, into the state’s urban areas, or to nearby free states to seek protection from the violence that permeated the countryside.  After 1863, enslaved men enlisted in the Union army in high numbers. The efforts of enslaved Missourians dealt a fatal blow to slavery in the state long before a Republican-dominated constitutional convention legally ended slavery in January of 1865. 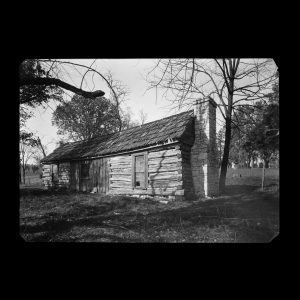 This Jefferson County cabin, which housed enslaved people, is typical of the double pen cabins with an enclosed dogtrot that were common in the Missouri countryside during the early days of settlement. At least two enslaved families likely inhabited the cabin. Many white settlers initially lived in modest log cabins such as this one but … Enslaved People’s Cabin 1865