This five-hundred-pound anchor is from The Steamship Arabia. The size of the anchor surprises many. The Arabia’s size, including the weight of its cargo and passengers, and the strong currents of the “Mighty Missouri River ” mandated the anchor’s bulk. The anchor is shown resting on a piece of the original wooden deck. Next to the anchor, the capstan’s sturdiness indicates the strength needed to pull the anchor onboard when casting off.

On September 5, 1856, the ship hit a submerged sycamore tree spar and sank quickly. Only the smokestack and pilothouse were visible by the next day. Although rescuers saved her 150 passengers, her 200 pounds of cargo was not recovered, despite several salvage attempts. Over time, the river shifted its course, and The Arabia vanished, covered with forty-five feet of river silt under a farmer’s field until rediscovered in 1988. The excavation took four-and-a-half months.

Steamboat travel prior to the Civil War on the Missouri River was essential not only for provisioning the towns along the river but for supplying the trading posts and outstations of the frontier. The cargo recovered from The Arabia represents a time-capsule and demonstrates that many along the river enjoyed lives of comfort, even luxury. Included in the recovered cargo are such items as French perfume, wines and liquors, fine china, cutlery, and practical items such as tools, nails, clothing, hats, and leather goods.

At its peak in 1858, over 130 steamboats operated full time on the Missouri River plus numerous vessels of smaller size The expansion of the railroads lessened the dependence on river shipping, and dam-building by the Corps of Engineers diminished the river’s navigability. These factors contributed significantly to a reduction in Missouri River trade and travel. 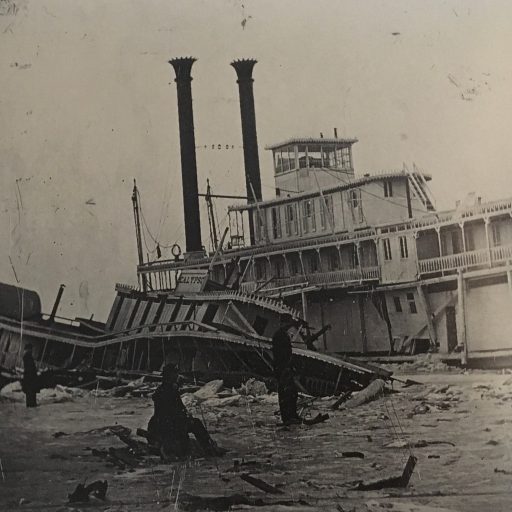 Missouri and the Western Steamboat

No object better reflected early Missouri’s history than the iconic western paddlewheel steamboat. Missouri boasts of access to two of the nation’s major interior rivers — the Missouri and the Mississippi, and, therefore, the steamboat figures prominently in the early history of the state. Oftentimes, Americans romanticize the steamboat age as a time of slow …