Osteopathic medicine emerged in north-central Missouri in the last decade of the 19th century at a time when medicines commonly included addictive opioids and damaging mercury purgatives.1 Andrew Taylor Still (1828­–1917) touted a medicine-free healthcare system that idealized the body as a machine capable of curing itself once restored to proper alignment. Still’s operators, as he referred to osteopaths, diagnosed illnesses by locating a blockage, typically near the spine. Operators then used their hands to physically adjust the patient and break up the blockage. Without the obstruction, the patient’s body could move blood and nervous fluid to the afflicted area, healing the illness. The body, according to Still, was a divine machine – evidence of God’s perfect design – and osteopaths were but humble mechanics.2

After Still founded the American School of Osteopathy in 1892, Kirksville became known as the “Missouri Mecca” for alternative medicine in the United States.3 Still and the school published The Journal of Osteopathy, a collection of articles promoting osteopathic cures and enticing students and patients to take a train to Kirksville.4 The school grew at an astronomical pace during its first decades, from around 20 total students in the early 1890s to more than 250 annual graduates by 1906.5

Student growth came after osteopathy gained legal status in Missouri. Osteopaths competing in the medical marketplace often drew the ire of non-osteopathic physicians, who would occasionally press charges against osteopaths for practicing medicine without a license.6 Missouri was the third state to carve out a legal niche for osteopathic practice as the result of sustained advocacy from osteopaths and testimonials from patients.

This slide’s owner was a zealous advocate for osteopathy. Arthur Hildreth (1863–1941) was one of Dr. Still’s first students at the American School of Osteopathy. Hildreth came to osteopathy after watching his father take treatment from Dr. Still. Though the elder Hildreth did not survive his illness, the younger Hildreth left his father’s convalescence with a profound respect for Dr. Still.7

In addition to a distinguished career as a practitioner, Dr. Hildreth played a pivotal role in spearheading the osteopathic lobbying efforts in Jefferson City. Like Still, Hildreth used osteopathy’s efficacy as its primary argument for legality. Patient testimonials illustrated the successes of osteopathy. This patient as advocate role extended all the way to the Missouri house and senate – Hildreth offered free treatments to skeptical lawmakers to convert them to the osteopathic cause.8

Hildreth’s sustained efforts were ultimately successful. Elite pushback derailed the first attempts at legalization when Governor William J. Stone (1848–1914) vetoed an osteopathic bill in 1895. Stone was concerned that osteopathic medical education was not as scientifically rigorous as regular medical education.9 In 1897, a new osteopathic bill found a new governor, Lawrence “Lon” Vest Stephens (1858–1923), who enthusiastically signed the bill legally protecting osteopathy. The reason for his enthusiasm? Stephens and his wife were both satisfied patients of Dr. Still.10

Still promoted women as practitioners at rates significantly higher than mainstream medicine. Male-dominated medical establishments limited women to supporting or care-focused professions, like nursing. In contrast, Still encouraged women to become osteopaths, and it was common for husband-and-wife pairs to matriculate at the university and practice together.11 Women’s participation did not necessarily mean equality, however, as the faculty at the American School of Osteopathy were overwhelmingly male. Women’s advertised practices also tended to focus on treating other women, while male osteopaths confidently expressed the desire to treat both men and women.

For all his noteworthy efforts to engage with women, Still and his school mirrored racial prejudices of the time. Women were included in the first class at the American School in the 1890s, but the first Black osteopath – Dr. Meta L. Christy – would not graduate from osteopathic medical school in Philadelphia until 1921.12

Osteopathy’s journey from its initial focus on manual adjustment to modern therapeutic equivalency with other medical practices resulted from its ability to grow and change with the times. The American School hired traditionally trained medical doctors to teach the anatomical, chemical, and biological sciences to students.13 This contrasted with chiropractic, another mode of midwestern manual healing, which mostly hired trained chiropractors to teach its students. As a result of their acceptance of medical knowledge and authority beyond Still’s teachings, Osteopaths incorporated laboratory and evidenced-based therapeutics earlier and more often than chiropractors.14

Learning from diverse authorities meant that osteopaths could expand their treatments and keep pace with increasingly effective laboratory-based medicines and surgical procedures. Students in Kirksville still learn Osteopathic Manual Manipulation, but today graduates go on to work side by side with medical doctors at hospitals and clinics nationwide.15 Osteopathy is the only American alternative medical practice to gain widespread legitimacy and afford its doctors practice rights on par with medical doctors.

Despite the expansion into medicines and other treatments that their founder rejected, modern osteopaths pride themselves on a holistic orientation focused on treating the whole patient, not just a cluster of symptoms. Dr. Still – ever pragmatic and patient-oriented – would approve. 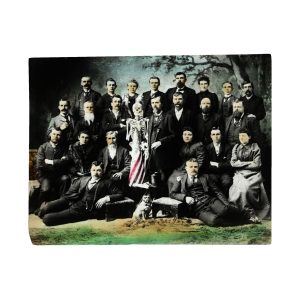 Glass lantern slide belonging to Arthur Hildreth, created by the US Slide Company of Kansas City, Missouri. It is a color image of the members of the first class of osteopathy on glass with Andrew Taylor Still in the center standing next to a skeleton. On October 3rd, 1892, Andrew Taylor Still began classes at … First Class of the American School of Osteopathy 1892

Still, Andrew Taylor. Autobiography of Andrew T. Still: With a History of the Discovery and Development of the Science of Osteopathy, Together with an Account of the Founding of the American School of Osteopathy. 1st ed. Kirksville, MO: The author, 1897. https://archive.org/details/autobiographyand00stiliala/mode/2up