Charles Augustus Lindbergh (1902-1974) is an extremely complicated person in American history. The virtues, flaws, and downright contradictions of his life and character are the subject of endless debate. What is not disputed is the influence that Lindbergh had on aviation. In an era when air travel, air mail, and even air forces were still in the embryonic stages, his achievements jumpstarted the industry and shined a spotlight on the nascent aviation community of St. Louis, Missouri. Indeed, Lindbergh’s success put St. Louis on the map as an internationally recognized hub of the aviation industry, a position that has benefited both the city and the state itself.

Lindbergh was born in Detroit, Michigan, to Charles August Lindbergh (1859-1924) and Evangeline Lodge Land Lindbergh (1876-1954). The couple separated after his birth, and Lindbergh spent most of his childhood moving between Little Falls, Michigan, and Washington D.C. His father often created tests to develop Lindbergh’s moral and physical strength and to teach him self-reliance and personal discipline; characteristics that would prove essential to his career as a skilled pilot.1 His mother, a schoolteacher, encouraged these same traits, as well as cultivated a strong interest in science and its applications.2 Lindbergh worked as a farmer in Minnesota as he entered adulthood. Later, he decided he wanted a career “in which his work with machines was not constantly interrupted, as it was with farming, by long stretches of dull physical labor.”3 This desire pushed him to enter the University of Wisconsin–Madison as an engineering major in 1920.

Lindbergh intended to earn his degree and become an airplane pilot; however, college life did not suit him, and he dropped out to enroll at the Nebraska Aircraft Corporation’s flying school in Lincoln. While at Nebraska Aircraft Corporation, Charles worked as a barnstormer4 and airplane mechanic to gain experience and earn tuition. After a year of barnstorming, he joined the United States Army Air Service in 1924 to receive more detailed training and graduated at the top of his class a year later. The Army did not need many active-duty pilots after the end of WWI, however, so Lindbergh returned to civilian aviation. He was hired by the Robertson Aircraft Corporation, headquartered in St. Louis, as chief pilot on the new CAM-2 contract airmail route. Lindbergh’s role as a chief pilot provided ample experience for his famous transatlantic flight.5 While waiting for the negotiation of his job, he worked as a barnstormer and flight instructor and continued to do part-time military flying as a reserve officer in the 110th Observation Squadron of the Missouri National Guard, stationed in St. Louis.6

The strong presence of the developing aviation industry in pre-Lindbergh St. Louis resulted from multiple factors. The city was a major manufacturing center due to its access to rail and water transportation, as well as its central geographical location.7 It was also home to Scott Field (now Scott Air Force Base), which had been used to train WWI balloonists, as well as Lambert Field, which was a hub of air traffic after hosting the 1923 Air Races.8 It was in this growing aviation community that Lindbergh learned of a $25,000 prize offered by Raymond Orteig to the first pilot to fly nonstop from New York to Paris. Orteig, a French immigrant, and wealthy hotel owner loved aviation and believed that his patronage would create the next great aerial spectacle.9 Lindbergh convinced nine St. Louis businessmen to finance his attempt to secure the prize money. Unable to buy a suitable pre-made plane, the group partnered with the Ryan Aircraft Company of San Diego to build a custom model, which was designed jointly by Lindbergh and Ryan’s chief engineer. Lindbergh named the plane the Spirit of St. Louis in honor of his sponsors’ hometown.10

From May 20th through the 21st, Lindbergh completed his successful transatlantic flight. This flight catapulted him into the international spotlight and is often seen as “the first incarnation of media-driven celebrity in the twentieth century.”11 Thanks to the press, his face and accomplishment was spread across the globe, making him the star of countless parades and parties wherever he traveled, both in the U.S. and internationally. Lindbergh, at first, “acquiesced to this popular mania… deciding to exploit his unique status” to further causes he believed in, such as aviation and American isolationism.12 His fame contributed to the “Lindbergh Boom” of aviation, and his ideas regarding commercial passenger transportation “became the standard for aviation in the United States and, subsequently, around the world;” Lindbergh even helped design the modern airport.[enf_note]Berg, 189.[/efn_note] However, his prominence was not something Lindbergh enjoyed and it proved to be a double-edged sword. This was evidenced in the infamous kidnapping and death of his son, Charles A. Lindbergh Jr. Additionally, his struggles with Franklin Delano Roosevelt would cast long shadows over his life, leaving scars that Lindbergh struggled with for the rest of his life.

Despite his personal struggles, Lindbergh’s promise that his success “would be a terrific boost for St. Louis… whose stature would shine with a nonstop transatlantic flight” was also proven true.13 Lambert Field (renamed the St. Louis Lambert International Airport in 1971) became a major flight hub for civilian and military aircraft.14 Various airlines, including McDonnell Douglas (later Boeing), TWA (Lindbergh served as chairman of their technical committee), and American Airlines all used St. Louis as an important hub in their operations because of its central location and newfound prominence in the industry. Later controversies, including his praise of the Nazi air force after a tour of aviation facilities in Germany and white supremacist beliefs, resulted in the inevitable fall of Lindbergh’s prestige, but the boost he provided to commercial aviation had a positive impact on modern aviation development.

Charles Lindbergh’s legacy is complicated by his argument for American neutrality in the lead up to WWII and his support for white supremacy, but his role in aviation and its evolution is undisputed. In a time in which aviation was still a dangerous occupation, Lindbergh’s seemingly impossible achievement gave incredible power to the aviation industry of St. Louis, transforming it into an international hub of commercial flight. Today, the St. Louis Lambert International Airport is the largest and busiest airport in Missouri and hosts millions of passengers each year. It is a testament to Charles Lindbergh’s vision, and a tangible reminder of the strength of the determination and human spirit he displayed when he and the Spirit of St. Louis made their mark on history. 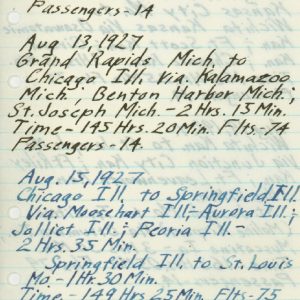 Charles Augustus Lindbergh (1902-1974) achieved international fame after completing the first solo nonstop flight across the Atlantic Ocean on May 20-21, 1927. A Detroit native, Lindbergh took an interest in engineering and aviation from an early age, becoming a barnstormer at age twenty-three before enlisting in the Army Air Service. After completing his service, Lindbergh … Charles Lindbergh Logbook 1927