Missouri neared statehood at a moment of serious financial struggle. Amid the depression that followed the Napoleonic Wars, important banks in Missouri were failing, and Missourians became suspicious of these institutions and the currency they issued. The legislature offered paper money to officials and merchants, which banks had loaned on the government’s credit, but the people generally refused to accept it. Yet in 1821, William Becknell made his first successful journey along the Santa Fe Trail and Missourians discovered a viable source of income to stave off the new state’s economic troubles. Many people traveled the trail and championed its robust trade in the years to come, and thus cemented its important role in Missouri’s early history.1

One such traveler, future governor Meredith Miles Marmaduke, detailed his 1824 expedition along the trail in journal entries, which the Missouri Intelligencer reprinted. The caravan was the largest yet to follow this route and comprised 81 people, which consisted  of white traders and enslaved people, more than 150 mules and horses, and nearly two dozen wagons.2 After camping in Franklin, Missouri to prepare for the journey West, the caravan traveled to Blue Springs along the Missionary Road, a path likely forged in 1821 by missionaries sent in an attempt to convert to the Osage peoples. From there the group traveled into largely unmapped territories of the West. Among the challenges faced during their two-month long trip were the roaming buffalo who repeatedly frightened away the caravan’s horses, and a desperate paucity of water, which led to the deaths of other livestock.

The party arrived in Santa Fe with about $30,000 in trade goods, which likely included brightly colored clothing and fabrics, jewelry, sewing pins, and hand mirrors.3 William Becknell observed that New Mexican consumers preferred merchandise of considerable quality. However, Marmaduke worried that due to systemic conditions, many customers of Mexican descent in the region suffered from poverty. Therefore, Marmaduke was concerned that this could prevent traders from moving their goods at a profit.4 However, such ventures, nonetheless proved so lucrative that some American agents tried to warn away potential rivals back home lest an excess of sellers harm their own prospects. The silver coin that merchants brought back to Missouri helped to stabilize the fluctuations of a frontier economy in which specie often ran short. In addition, Missouri farmers were eager customers of the mules purchased in New Mexico. These reliable and versatile draft animals, which were a cross between a female horse and a male donkey, became an important Santa Fe Trade trade commodity.5

The trade’s growing profitability caught the eye of a famous Missourian, U.S. Senator Thomas Hart Benton, who saw that Missouri’s strategic location made it a valuable gateway to the West. Anyone who wished to journey the Santa Fe Trail had to start in Missouri. Aided by Missouri trader Augustus Storrs, Senator Benton was a key component in sponsoring legislation to mark a road to Santa Fe. Storrs previously traveled the route in 1823. Benton and Storrs were also assisted by Alphonso Wetmore, a paymaster stationed in Franklin, the small town where the trail originally began.6 Once the bill passed through Congress, three commissioners oversaw the surveys of the road: Benjamin H. Reeves, Colonel Pierre Menard, and George C. Sibley.7 The men hired Joseph Cromwell Brown, an experienced surveyor who had been responsible for determining several key meridians and state boundaries in the past. In 1825, Brown began work charting out the Santa Fe Trail and produced a map spanning the entire length of the route later that year.8

The town of Franklin became an important trade center from 1822 to 1826, a marketplace where traders could buy merchandise at 20 to 30 percent above the prices in Philadelphia and take them to Santa Fe for a profit of 40 to 100 percent. Such bright prospects drew many people to the area near Franklin, but a series of floods through 1826 shifted the course of the Missouri River, which soon washed away the town altogether. Later, the town of Independence in western Missouri replaced Franklin as the starting point of the Santa Fe Trail.9 As the Santa Fe trade prospered in the subsequent decades, steamboat traffic increased significantly on the Missouri, Mississippi, and Ohio Rivers; goods brought up from New Mexico via the trail moved eastward to St. Louis and beyond. There were also Mexican traders who traveled the Santa Fe Trail in reverse to buy American goods from sellers in Missouri.10

However, the prosperity of the Santa Fe Trail did not last. After Mexico gained its independence from Spain in 1821, years of political instability followed. Albino Perez, the federally appointed governor of New Mexico, became increasingly unpopular after he imposed sharper regulations on trade within the province, including on the Santa Fe Trail. Widespread anger among the people of the area erupted into an uprising known as the 1837 Chimayo Rebellion. The rebellion resulted in the killing of the governor, but collapsed the following January. The Santa Fe trade soon shrank to levels witnessed in decades prior to 1821. The Trail assumed renewed importance with the outbreak of the Mexican-American War, which served as a vital corridor for the Army of the West and later represented an important link between the United States and the southwestern territories acquired in the Treaty of Guadalupe Hidalgo.11

Several factors contributed to the decline of the Santa Fe Trail in the early 1840s. The Oregon and California trails commanded greater attention and siphoned away some of the people and wealth that poured into the West. The emergence of mines in Colorado and Nevada reduced the demand for Mexican silver, and several Americans–many of them in Missouri–began to breed mules that were superior in functionality. Heightened dangers threatened the fewer numbers of traders who continued to use the Trail.12 The fear of attacks by Indigenous raiders was a concern by the white traders. Additionally, during the Civil War, there was a legitimate concern by traders of small bands of Confederate guerrillas, as they attacked Independence and other provisioning towns in Missouri for political and economic reasons. Traders moved as many as 50 million pounds of freight along the Trail in 1865, yet by this time, the Trail had become nearly out of use.13 Soon, railroads spanned across the trans-Missouri West and took most of the region’s traffic with them. Once the first trains reached New Mexico in 1880, the Santa Fe Trail finally became obsolete.14 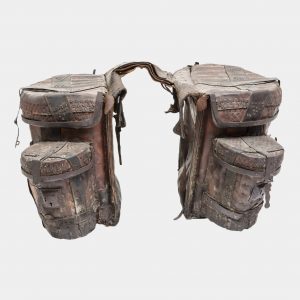 The Santa Fe Trail was a route pioneered in 1821 by William Becknell to transport commercial goods from Franklin, Missouri across “Indian Country” to the northern Mexican city of Santa Fe. It took 8 to 10 weeks to haul goods by packhorse or Conestoga wagon from Western Missouri to Santa Fe. One of the thousands … Saddle Bags 1842