In 1995, the mule was recognized as the official animal of Missouri. The honor was much deserved for an animal that helped many Missourians on their farms and many soldiers on the battlefield. The Missouri mule was a prized draft animal known for its strength and agility. In the late nineteenth century, Missouri livestock breeders became recognized internationally for raising quality mules.

A cross between a female horse and a male donkey, mules were brought to Missouri from Mexico in the 1820s via the Santa Fe Trail. In 1821, William Becknell led a party from Franklin,  located on the Missouri River in Howard County, to Santa Fe. His journey was the first legal trade between the United States and Mexico. The Missouri traders observed that the Spanish mules were small, hearty animals capable of working long hours in blistering heat. Becknell returned to Franklin with mules, which he believed were better than horses for the rigorous work demanded by life on the trail.1

Animal handlers, such as the teamsters on the Santa Fe Trail, had to overcome the infamous reputation mules have for being stubborn. Those who did, found mules to have an “independent attitude” and capable of performing all kinds of labor. They could pull and carry more weight than horses and go for longer periods with little food or water. Mules were easier to train than horses and were remarkably surefooted. As smart animals, they were careful and less prone to injury than horses. Well-trained mules also were unlikely to become frightened in large crowds. The versatile and strong mule rapidly became a draft animal of choice for powering farm equipment and hauling freight.2

The opening of the Oregon Trail and California Trail greatly increased the demand for mules, as livestock breeders and traders recognized their potential utility as draft animals for transportation and agricultural purposes. While rugged, Spanish mule stock were sometimes too small to pull increasingly heavier wagons that could be filled with up to 5,000 pounds of cargo. Missouri traders discovered a robust market selling these smaller animals to work on southern farms and plantations, where they were valued for their intelligence, sure-footedness, and ability to work in warm temperatures. Mules were a favored draft animal on southern farms until well into the twentieth century.3 Mules, most of which were bred and raised in the Upper South, also played a major role transporting military supplies and hauling large guns.4

In most cases, mules are infertile since they are a hybrid cross between two equine breeds; therefore, mules were typically bred by specialized male breeders rather than raised by individual farmers.5 Breeders in Tennessee and Kentucky earned a reputation for producing larger mules capable of heavier workloads. As a result, the prices of the smaller Spanish stock fell when these larger animals became available. Missouri breeders adjusted their practices to meet the market demand and began concentrating on breeding big jacks and large mares, laying the foundation for the renowned Missouri Mule.6

For decades, one company dominated Missouri’s mule industry: Guyton & Harrington in Lathrop, Missouri. The company was founded by two cousins, J.D. Guyton and W.R. Harrington, who came to Missouri in the 1880s from Mississippi and Alabama. Under their leadership, it became the largest mule dealership in the world. Their main facility in Lathrop had three large barns, each capable of housing 1,000 mules. The company also operated two large facilities in Kansas City and East St. Louis. Five hundred buyers kept mules moving through the elaborate economic system, which matched sellers with buyers.7 A lucrative contract with the British army was largely responsible for Guyton & Harrington’s remarkable success. From 1901 to 1902, the company supplied the British with mules for the Boer War in South Africa. In anticipation of future wars, the company kept fertile land for future use and were thus able to meet the demands imposed by the Great War.8

Missouri continued to dominate the trade in mules into the early decades of the twentieth century. Located in the southwest corner of the state, Springfield became one of Missouri’s most prominent livestock centers. On June 28, 1914, ironically the day Archduke Franz Ferdinand and his wife Sophie were assassinated, the Springfield Republican reported on the city’s thriving mule industry. Six mule dealers were located on Convention Avenue. Many of their animals were raised on local farms, but the companies also purchased livestock from southeast Kansas, Oklahoma, and northern Arkansas. They had customers from as far away as Delaware and San Francisco. The peak of the livestock trade in Springfield was in 1916; over 14,000 horses and mules were shipped from the “Queen City.” Their estimated value was $2.5 million.9 Yet, Guyton & Harrington continued to dominate Missouri’s mule industry. By 1918, they had expanded to 18 buildings on 4,700 acres of land, with 150 men caring for 50,000 mules. By the end of the war, they had supplied the British army with 180,000 mules. This represented about one half of all those shipped from America during the war.

Although rapid technological innovations in the early twentieth century revolutionized warfare, armies still relied heavily on mules for transporting equipment during World War I. Just as they had during the Civil War, commanders on the Western Front depended on animal power to move men and equipment. Trucks were widely available, but they became less reliable the closer they got to the battlefield. They were prone to breakdowns and were difficult to navigate on muddy roads in forward areas. Mules, however, could easily maneuver throughout the war-torn landscape. Strong and agile, they carried heavy loads for long distances and their surefootedness in treacherous terrain, was legendary. Animals, like soldiers, endured harsh privations during wartime, but mules recovered from intense exertions quickly and could subsist on vegetation when grain and hay were not available. Troops in the trenches received most of their supplies, including all-important hot meals, by mules. Even tanks, one of the most recognizable symbols of modern warfare, depended on mules to transport their ammunition and gasoline.10 Appreciation for the contributions of Missouri mules to the war effort did not go unnoticed by the British army. As one correspondent wrote, “The much maligned, supposedly stubborn, balky, and generally pestiferous mule, has won a place in the heart of the British Army from which he can never be dislodged.”11

The mule industry slowly declined after the First World War as farmers began turn to tractor power. Tractors could be used to plow – one of the hardest farming tasks that relied on animal power. Yet, change did not come immediately because early tractors were unreliable and very few implement attachments were available for these early machines. At this point, the new technology simply increased costs for the farmer as they had to maintain both machines and work animals. In 1925, it was estimated that 14 percent of Missouri farmland was tilled by tractors.12 By the early 1930s, more implements were available, and tractors had become a real threat to animal power. Work stock, however, remained common as there was little money for machinery and the gasoline to power it in the early days of the Great Depression. Intense drought and disease from 1934 to 1936 devastated livestock and led most farmers to finally make the switch to tractor power.13

The efficiency of tractors ensured that farmers would never return to animal power, and the once vibrant Missouri mule market dried up. The change was illustrated by President Harry Truman who recalled that growing up on a Missouri farm he “had to learn to judge mules, and you had to know a good one when you saw him, or he would get the best of you.” During his 1948 presidential campaign, Truman stopped at a plowing contest in Iowa. The president asked the farmers if he could do some plowing with a four-mule team. The farmers told him, “No, that’s obsolete. You’re living in a past age. We have no mules on the place. You’ll have to go to Missouri to get one.” Accepting the change, Truman said, “All right, I’m not one to turn the clock back.”14

Even still, Truman recognized that mules have been an important part of Missouri’s work, industry, and military life since the earliest days of statehood. Though no longer a substantial part of Missouri’s economy, President Truman still featured them in his inaugural parade on January 20, 1949. Brought from his hometown of Lamar, four mules pulled a wagon along the route in a fitting tribute to their role in Missouri’s history and culture.15 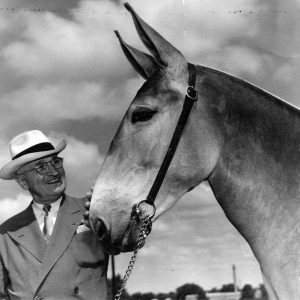 Former President Harry Truman and a Missouri mule at the state fair on August 23, 1955. As a young man, Truman worked on his family’s farm for eleven years where he plowed many fields with mules. The sturdy animals were first brought to Missouri by traders along the Santa Fe Trail in the 1820s. Mules soon became … Missouri Mules 1955